I’ve had the revered Jerker desk for ages now and had an idea to create a double desk as my wife had lost her work space when we had a child. When I saw an ad on Kijiji for a cheap partial Jerker desk I jumped on it. As my wife is short(5’4″) and I’m tall(6’2″) this configuration worked perfectly for us. I was able to install the second desktop below the original desktop and create a double decker work space.

I installed the cross support bars from the 2 different desks back-to-back which enabled me to wedge my monitors in between them. This worked out great as I gained a ton a space by not having to put them on the shelf or on the swivel shelves. It also gave some privacy between the 2 spaces, so when we’re both working we’re not staring at each other. And as an added bonus it’s a handy spot to stick magnets.

I have 2 Jerker swing arm shelves, one you can see in the picture, the other is installed underneath to get my subwoofer off the ground. For stability I installed the second set of legs the opposite direction. I purchased some 3″ bolts to then hold them all together. 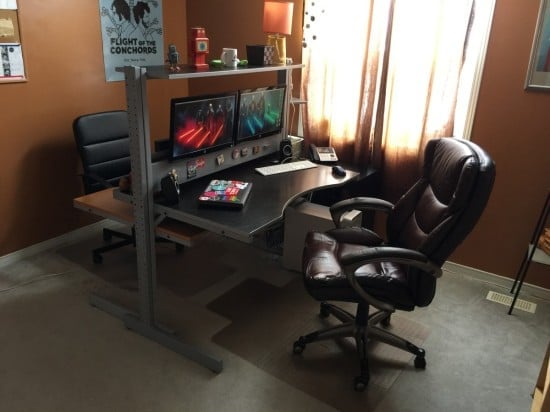