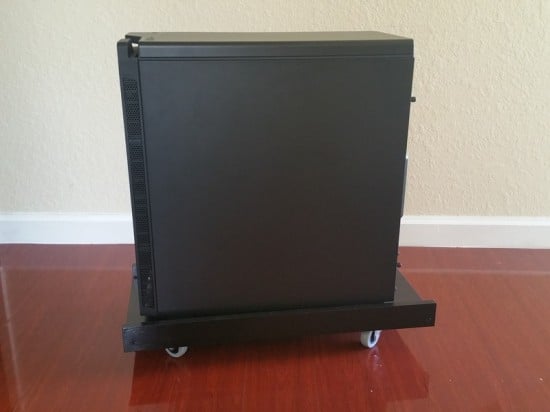 Build Time: Less than  3 hours in the course of a few days ( Busy schedule)

So this is my PC Stand that I built recently using cheap IKEA parts. I had built my first PC and needed a new rolling stand as it weighs about 25#’s. Plus I wanted something that would match my PC Case. I found that Ekby shelves were on sale in Black/Brown for 2.99 so that worked out well. It was also longer than the length of the PC case.

I originally bought the Algot Caster wheels, but after building the PC stand, I found the wheels didn’t roll very smoothly due to the weight. I since then got sturdier wheels (Rill) and it rolls smooth along my floor. For the sides I used a picture ledge which conveniently doubled the length of the Ekby shelf. So all I did was cut it in half. There are 2 parts of the picture ledge and I chose to use the smaller portion. I tried using the paint provided by IKEA, but I needed to acetone the picture ledge more as the gloss was laid on thick. Didn’t have much time to spend so I ended up spray painting with Satin black which I had in stock. Attaching the picture ledge to the sides I used a combination of wood glue, masking tape (in replace of clamps), and black wood screws. 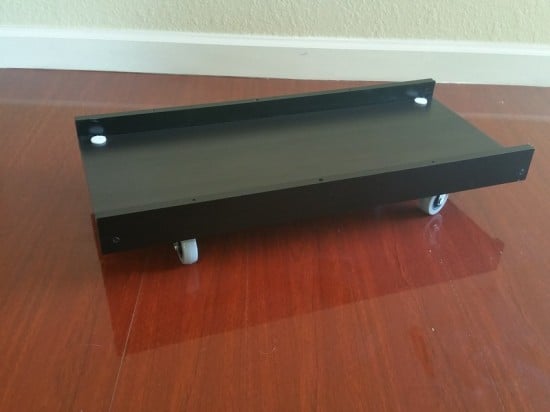 Being a designer and my own worst critic, I’m not too happy with it, but it works! Version 2 will be in the works when I have time.