Mudroom Hack With Some Help From Rationell 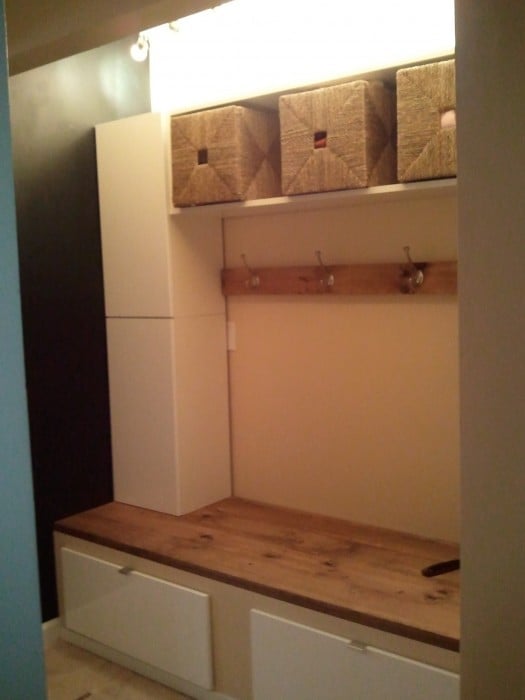 Description:   When we bought our house little over a year ago my wife gave me 2 months to get as many projects completed as I could before the family moved in.  One of the many, many things I did was re-locate the washer and dryer that was situated in a closet between the garage and the kitchen.  After I moved the W/D I realized that the space would make a perfect mudroom, and so began my process of trying to make the perfect mudroom.  For obvious time reasons I was trying to buy something whole from Crate and Barrel or any one of a number of sites I visited.  However, there was something about each of them that I just didn’t like or didn’t fit properly in the space.  Once I was out of ideas and time I put the project on the back burner.  A few months later I had some free time and so I started searching again for something that would work, but what I kept finding was lots and lots of great DIY ideas and Ikea hacks. Unfortunately, they were not the style I was after nor the correct size I needed so I decided to combine the best of DIY and Ikea hacks and make my own.

I decided I wanted a bench, wall-to-wall, with drawers underneath so the kids could throw their sneakers in  and close the draw to hide the mess.  If I put in shelves or cubbies I knew there would be sneakers and shoes everywhere across the floor; not to mention the hassle it would be to try and find matching pairs  in the morning.  Of course I needed hooks for coats, school bags and purses, but I also had envisioned some shelf overhead with baskets for hats, gloves, scarfs, etc.  Lastly, I wanted to find some way to organize all that other junk that is needed  before  we head out the door.  Specifically for me I wanted a place for my wallet, keys, spare keys, sunglasses, membership cards, receipts,  etc.  Here is what I made. 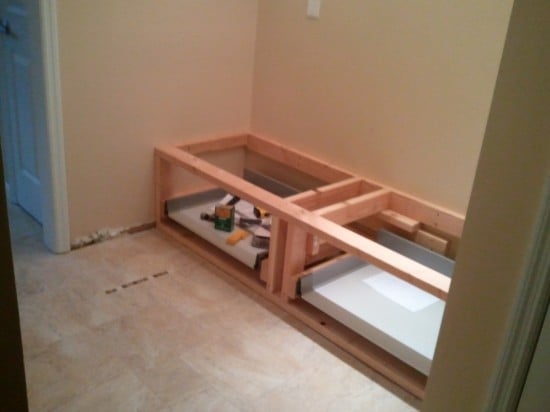 Because I knew I wanted to use drawers under this bench I decided to build everything around two 30″ Rationell drawers.  Together these two drawers were about 18″ short of my space and no Ikea cabinet, even if I hacked it to pieces, would work well so I built a frame for the two drawers.  Similar to other benches you’ll find here I simply used 2x4s to bench and within in bench structure I measured out the height and width of the two Rationell drawers.  Once the bench frame was built and the drawer rails were in and tested I was pretty much home free.

I then moved on to cut the piece of MDF for the bench face based on the measurements of the two drawers.  I test fit the Abstrakt drawer fronts to ensure there was enough of a lip and the drawers would open and close.

I have to take a minute here and make a public announcement, when I bought the Abstrakt drawer fronts I did not know (and was not told) that they different heights.  I was expecting the two large to identical heights and the two small to be identical heights; this isn’t the case.  And when I test fit the drawer I used the largest drawer front, so one of the openings was too big. In order to fix this and not re-cut a piece of MDF I went to the as-is section at Ikea and picked-up a matching cabinet door front.  I took it home drilled some screw holes and it looks great. 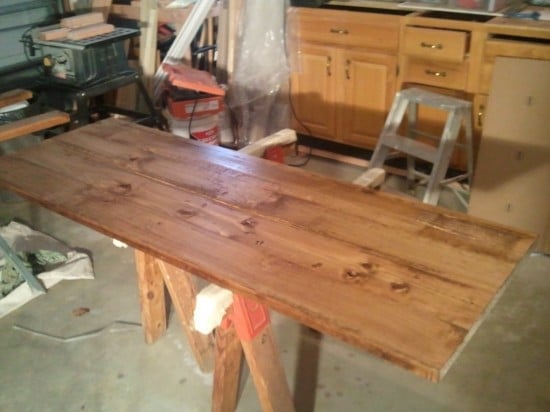 After the bench front was on I moved to the bench top.  I found a local dealer who sells re-claimed wood.  I went and grabbed some 2x5s for a steal compared to what I would have paid for new at the local big-box store.  I cleaned them-up a little (removed nails and light sad to get the dirty off) I gave them a rough cut to make them manageable to work with.  Once I figured out the depth I needed I lined-up the boards and made the necessary cuts.  Once completed I used a pocket-hole-jig  to screw them all together.  After they were secured I did a final measurement and cut the piece to fit.  To help the wood look a little older I brushed on some dark walnut Watco Danish Oil  which helped all of the marks and damage in the wood pop-out more.  I also had enough of the re-claimed lumber to use as a support for the coat hooks. 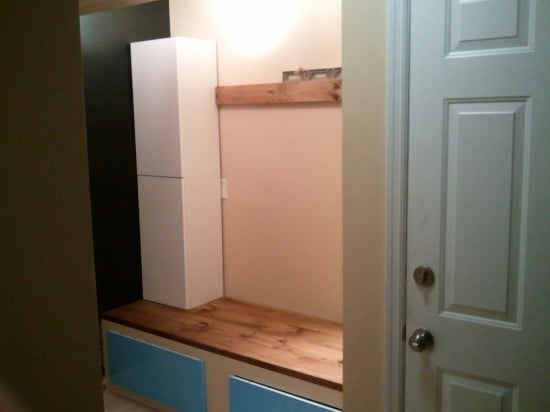 After the bench top was in place I moved onto finding a storage solution.  Again, because I wanted to hide our junk I decided to make a pillar out of two Akurum 12×30 wall cabinets.  They were just big enough to actually hold stuff, but small enough that they didn’t take-up much real estate on top of the bench.   These wall cabinets got matching Abstrak doors to match the drawers under the bench.

Lastly, after the cabinet column was in place I had to get the top shelf that would span the width of the area.  To do this I picked up a Akurum cabinet frame and my intent was to cut off the few extra inches,and to flip the one board so shelf-holes would not be visible.   To this date I’m not sure why I insisted on trying to get this cabinet on top of the column of cabinets.  I only succeeded in destroying the walls and getting myself frustrated.   After about two hours of trying I called it quits.  Later that night I was thinking about problem and decided to attach it to the pillar of cabinets. Honestly, I like it so much more the way it is now.