Description: The Ikea APA toy boxes are inexpensive and reasonably attractive (with their white laminate side-panels), but I have never found them to be particularly useful for storage as intended. Inspired by a project in the book “ReadyMade: How to Make [Almost] Everything: A Do-It-Yourself Primer

” and the classic Eames storage unit

, I built this simple shelving unit out of two APA boxes ($14.99 each) and the vertical brackets from a HYLLIS shelving unit (also $14.99). The sliding door panels are fashioned out of some scrap 1/4″ birch veneer sheets, salvaged from the back of an old BILLY bookcase. The doors slide back-and-forth in the pre-cut slots on the APA. The back panel is also scrap 1/4″ birch veneer from a BILLY bookcase. Any 1/4″ MDF would work for the doors and the back panel, and could easily be painted to taste if you don’t have veneer.

1) Prior to assembly, prime and paint bottom panels of two APA boxes. These will be at the rear interior of the storage unit, so will be very visible. I used Kilz primer and two coats latex interior wall paint. I was able to get inexpensive paint samples from the hardware store since there’s not much surface area to cover (and I still have plenty left). You could paint or stain the APA wood pieces as well, but I chose to leave them as-is.

2) Assemble the two APA boxes per the instructions, but flip one of the panels so the white side is toward the inside of the box (this will be the interior shelf surface). Set the box lids aside; I didn’t use them in this project. 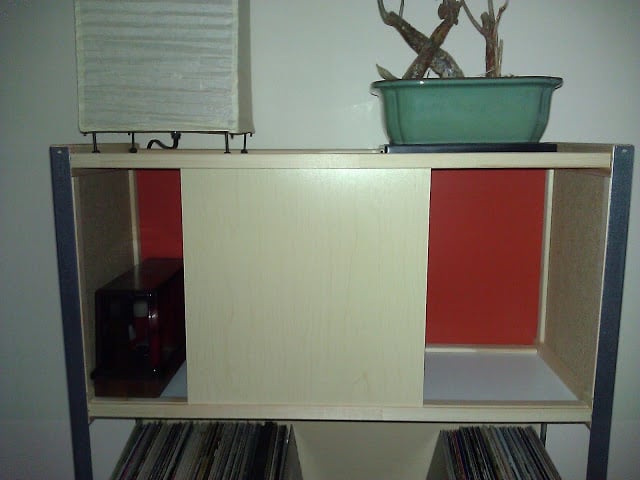 3) Set aside the metal HYLLIS shelves; I didn’t use them for this project (but am saving them because scrap sheet metal could come in handy). Lay out two of the HYLLIS brackets on sawhorses and fit one APA box at the top, open end facing away from the brackets. Fit the other APA box about two feet from the first (the spacing here is flexible). Be sure to align the tops of the two brackets so the unit won’t wobble. Drill holes through the metal and wood, and attach the boxes to the brackets one screw in each corner (4 screws per box). I attached from the sides of the box, but you could also attach from the front and back. You should be able to re-use some of the pre-drilled holes in the HYLLIS, but you will also need to drill new ones. Since they’re visible, I used 3/4″ #6 square-drive sheet metal screws and washers. Be sure to offset your screws from the APA box bolts, and pre-drill your holes so you don’t split the wood.

4) Measure and cut a piece of 1/4″ MDF to fit between the two boxes. I used a birch veneer, but you could also use plain MDF and paint it or cover it with contact paper. I used a small circular saw, cutting with the veneer facing downward to reduce splintering. Roughly sand the edges with 100 grit sandpaper.

6) Place the remaining two HYLLIS brackets on top of the unit, drill holes, and attach using screws as in step 3. Be sure to align the tops of these brackets with the tops of the existing two so all four legs are the same length and the unit won’t wobble. Each box will now be attached to each leg with two screws, one in each corner of the box.

7) Attach the plastic feet included with the HYLLIS to the bottom of the four brackets (I had to tap them on with a rubber mallet). The unit should now stand freely. I found it to be surprisingly sturdy and stable (the back panel helps quite a bit).

8) Cut two sliding doors out of 1/4″ MDF. The door height should be 12 3/8″ high to fit in the pre-cut APA slots. The width is up to you; mine were 12″. Sand each of the edges, and round the corners slightly, using 100 grit sandpaper. Sand a little bit extra on the top and bottom edges – these will go into the slots and you want them to slide nicely. Pop the doors into place by bending them slightly. You could also put them in when doing the initial APA assembly, but I didn’t have the foresight at that point and didn’t feel like disassembling the whole thing. 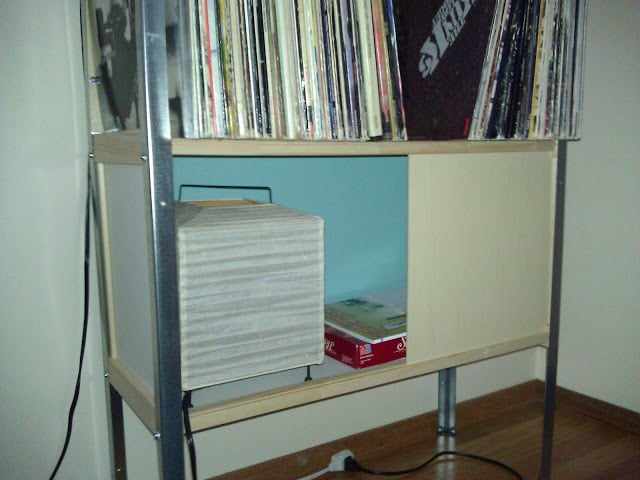 In the end, I’m reasonably pleased with how it looks and have found it to be slightly more practical than the APA boxes or HYLLIS shelving units are on their own. Some other enhancements I thought about (mostly inspired by the Eames storage unit) but didn’t try:

* Replace the back panel with a third APA unit rotated 90 degrees from the others (and a third paint color in the back).

* Use pegboard instead of 1/4″ MDF for the doors and/or back panel.