My 7 year old daughter is in the smallest room in the house and outgrowing her Ikea Minnen extendable bed. I can’t extend it to its full length where it is because the wall is only 1.8 metres long, the rest of the room is taken up with wardrobe and drawers.

So I got thinking… She needs a cabin bed that has the wardrobe underneath, and then the bed can run along the length of the room.

I thought it would be an easy buy. No such luck! I found that a lot of off the shelf cabin beds have too much wasted space under them – inaccessible voids behind the ladder, tiny wardrobes, desks, just not enough storage.

I measured the room and drew a plan in Sketchup. I found that the length of the room would fit a 2m long bed leaving about 60cm for a cupboard of some description. The width was a different matter – a normal single bed would be too wide and would almost obstruct the window, but I knew Ikea sold narrower mattresses because of the extendable bed… 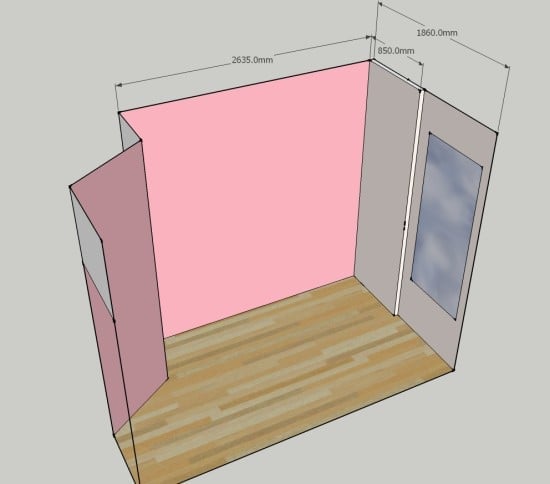 Off I went to Ikea armed with a measuring tape.

I liked the look of the Stuva loft bed, but like I said too much wasted space. I thought I could use it as the basis of the hack, and gave it a good dose of looking at. I decided against it – too expensive as I would only be using the bed frame and ladder! It gave me some ideas though. 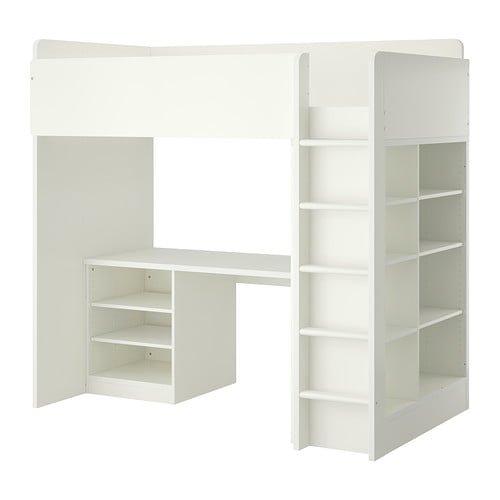 As soon as I saw the PAX sliding wardrobes that was it. The 150cm wide wardrobe would leave me with 50cm for the ladder and there is a PAX 50cm frame to form the basis of that.

I went home and got back on Sketchup. 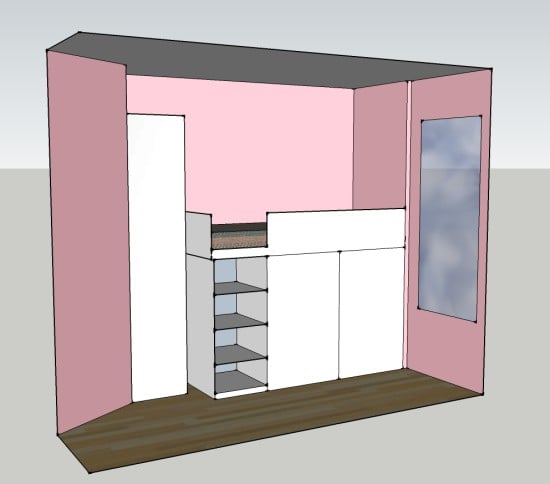 So basically all I have to do is cut down one 75×236 cm frame to give me a 150×118 cm wardrobe and cut down the 50cm frame to the same height for the ladder (not a bad height for clothes hanging and a cabin bed!).

I did that without too much fuss, although using one frame for the double wardrobe meant I had one bottom half and one top half. I bought a couple of extra shelves as corresponding top/bottom.

Now to tackle the doors…

I cut them down by half and used both top halves as the fixing points for the runner brackets are already there. (I’m sure the bottom halves will come in use on another project).

A word of warning here – this has to look good. Use proper cutting equipment – I used a circuIar saw (with new blade) on a track guide.

Looks a little daunting, just scrape out some of the paper with a chisel, glue in a piece of timber and screw the runner brackets on.

I then clamped the 50cm ‘ladder’ frame to the wardrobe frame – sandwiching a piece of 18mm MDF between as the thickness of the right hand ladder upright. Now I could work out the size of the mattress base.

I decided on a solid mattress base rather than slatted to give the bed some sturdiness – one length and the foot end are going against the walls so there’s the back and one side of the structure.

I cut two sheets of 12mm MDF to 2018mmx820mm and made a sandwich of 34mmx44mm battens at 40cm intervals, leaving space at the edges for wall, headboard and guard rail battens. 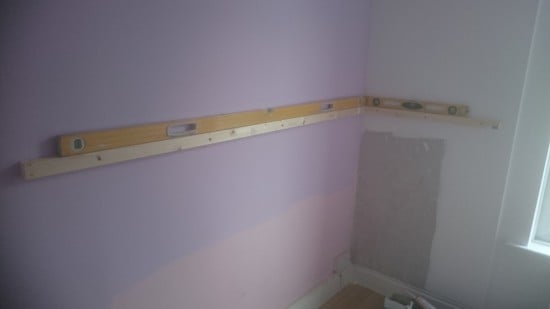 I fixed the wall battens to the walls and slid the base onto them. Propping it up with a piece of timber I secured it in place through the top and bottom. 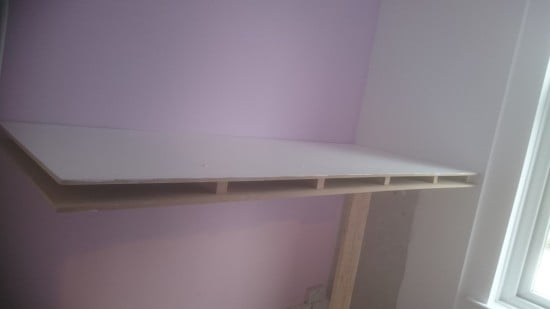 For a dry run, I offered up the headboard, ladder support and guard rail…

The headboard is floor standing. It is a sheet of 18mm mdf (slightly wider than the mattress base to allow the ladder to protrude) with a 44mmx34mm batten attached at the same height as the mattress base battens.

I got the height above the base from the STUVA bed. 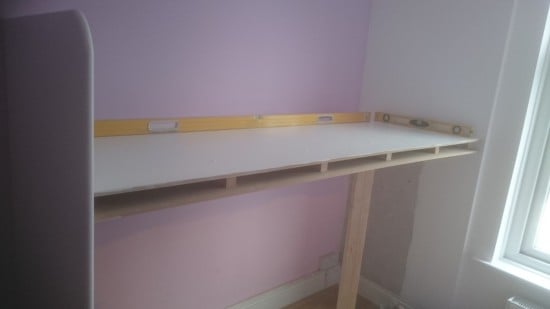 The right hand ladder support is also 18mm MDF – the same height as the headboard. 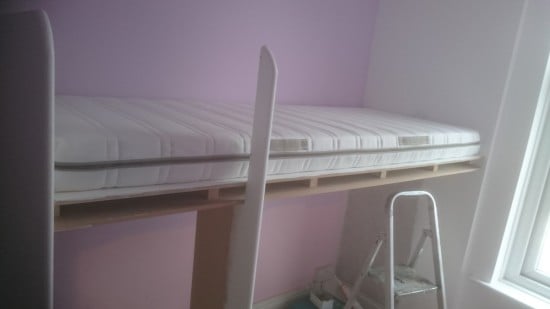 The guard rail is 18mm MDF which I routed two slots in. 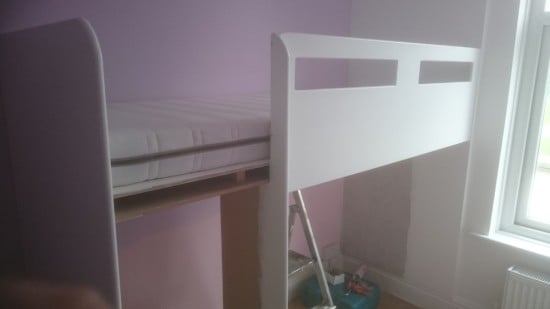 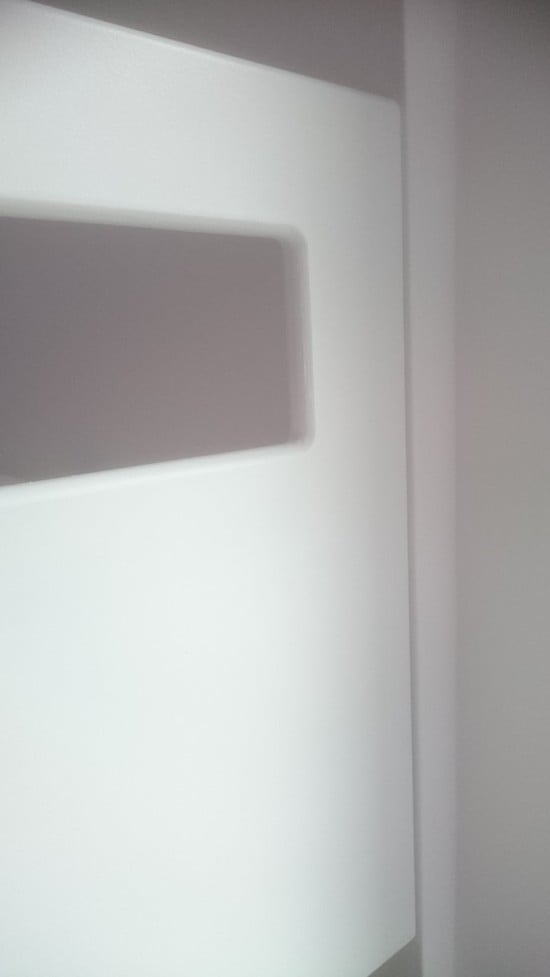 I screwed some strips of 20mm ply across the top of the wardrobe frames to allow a gap for the door runners to move freely. The front sliding door bracket is proud of the top of the frame. 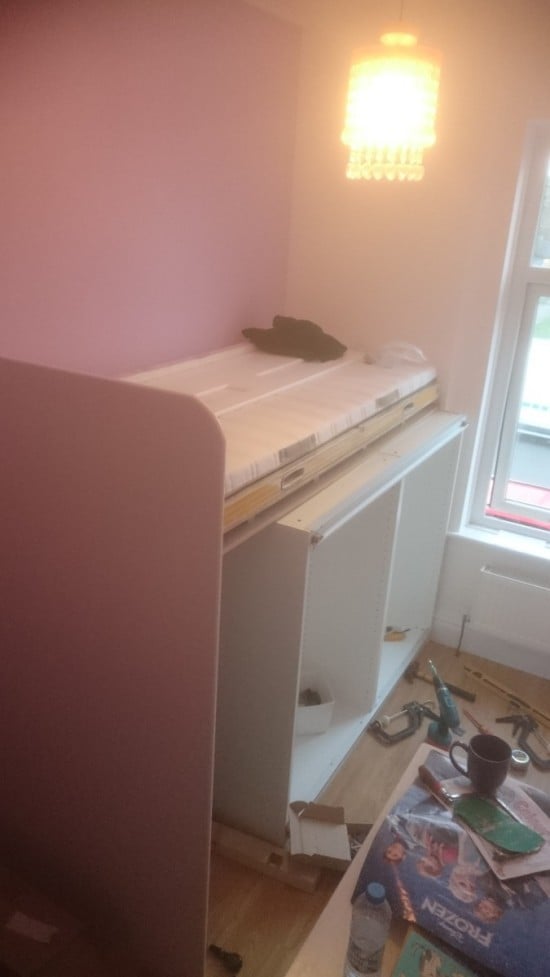 Next was to sort out the ‘ladder’ frame. I was just going to slide some shelves in as the ladder, but I thought “I’m wasting space here”.

I put three shelves in equally spaced, called my daughter in to see if she could climb up (she could with ease) and measured the gaps.

The 50×58 KOMPLEMENT drawer would fit nicely with enough room to stand on the shelf! 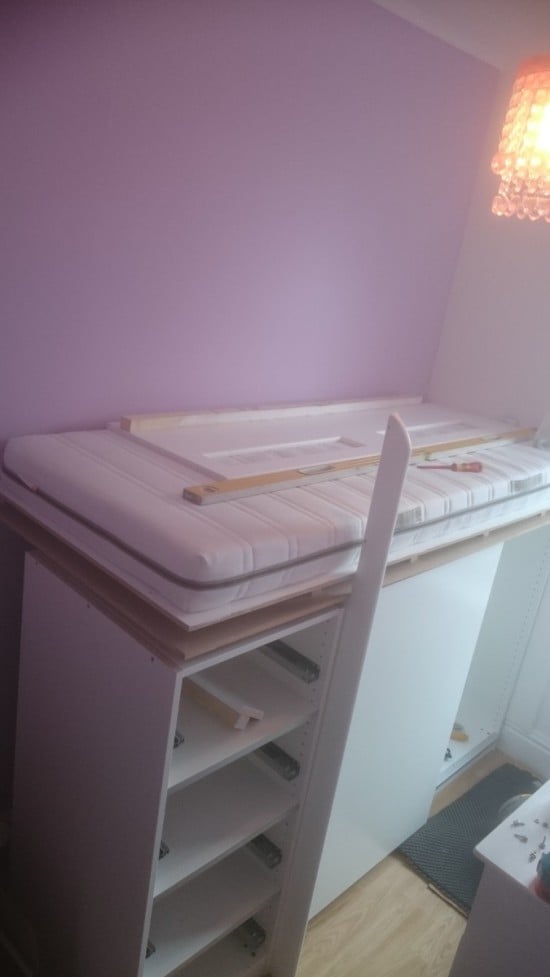 I ended up buying the wider 75cm shelves and cutting them to slot in but also protrude 4cm. 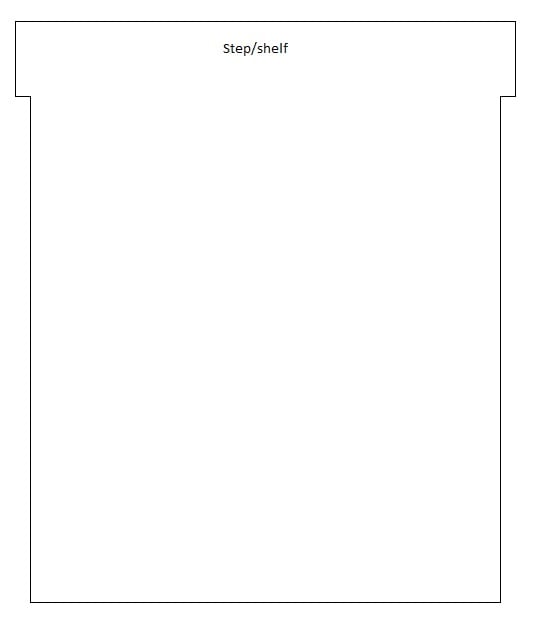 I also added an aluminium angle to the fronts for more support (I’ve stood on them and they don’t bend!). 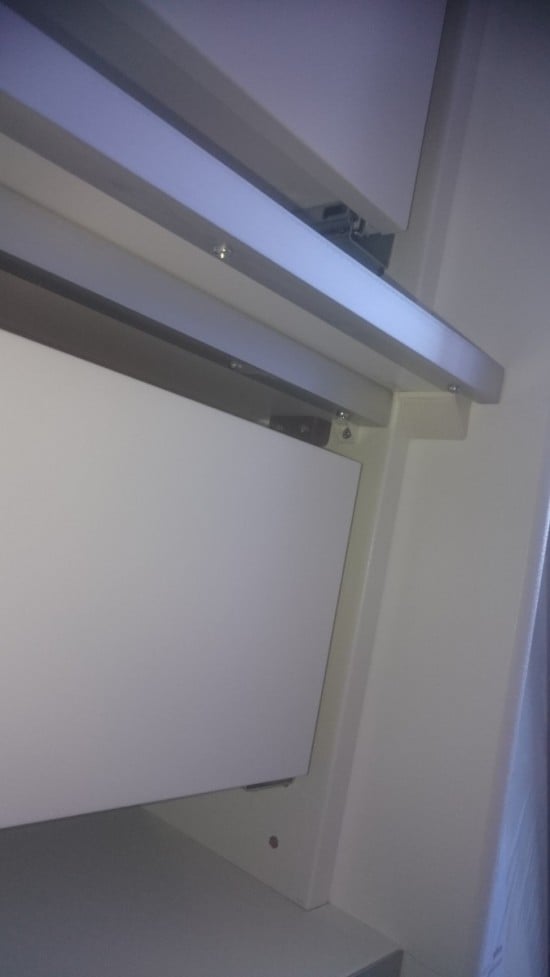 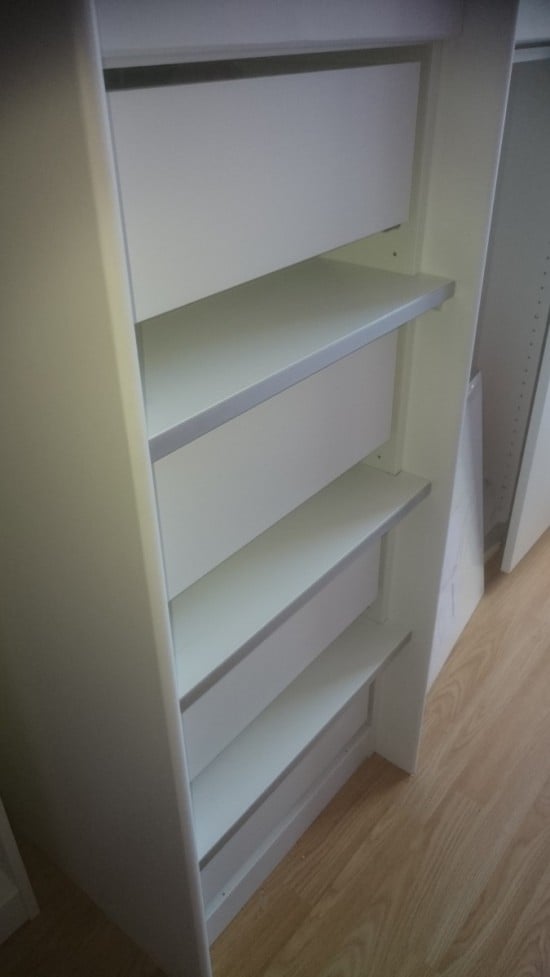 All that was left to do was hang the doors, fit the guard rail and an insert for above the ladder.

I fitted a 50×236 PAX frame with mirrored door behind the headboard and the gap between I filled with some of the leftover furniture wood as a shelf. 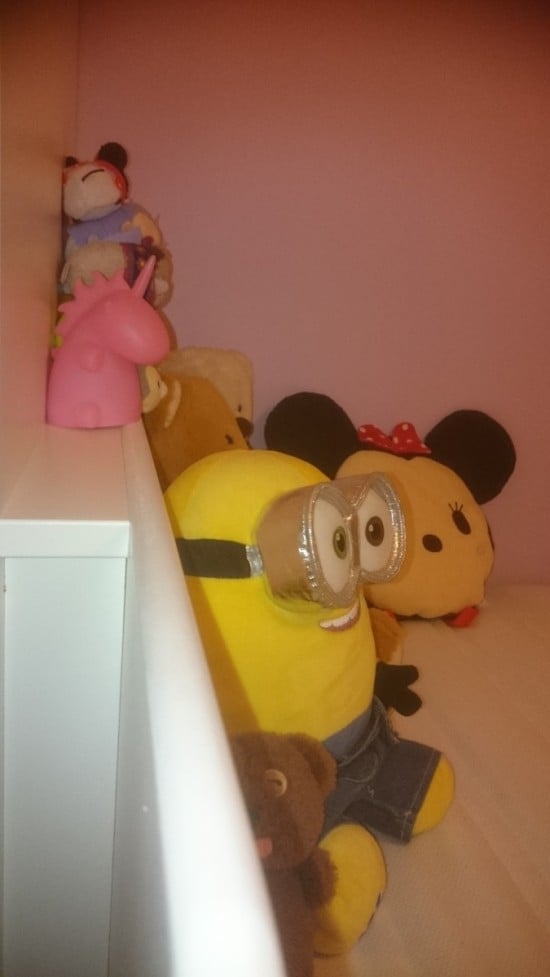 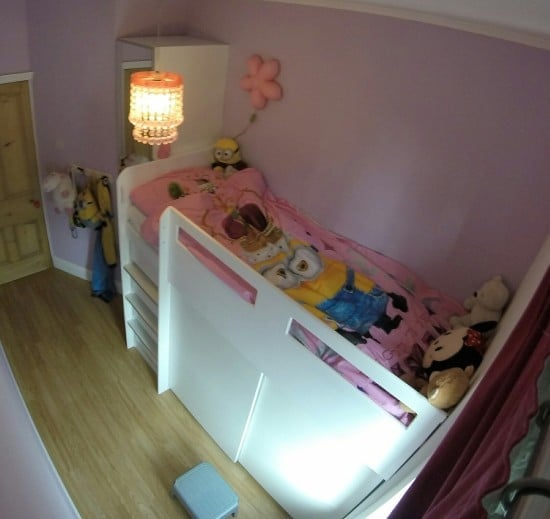