From my trip to IKEA of Sweden and conversations with IKEA co-workers, what’s apparent is this: IKEA is acutely aware of its need to innovate. It is aware that its designs need to expand, that its concept-to-market process needs to be shortened. It knows the company has been around for over 70 years and it needs to stay relevant.

What comes out of this awareness? The unrelenting drive to close the gap, leading to collaborations with designers, embracing diverse influences, and now, setting up an entire innovation lab to explore bold new ideas.

Space10 is located in Copenhagen’s hip meatpacking district. It is a future-living lab for the exploration of ideas to co-create a better everyday life for people. What’s interesting is that while IKEA pays the bills and gets to eyeball all concepts birthed here, Space10 functions independently as an external innovation lab run by Rebel Agency, the Danish design firm founded by Carla Cammilla Hjort. This makes a lot of sense as autonomy gives designers freedom to explore concepts without the shackles of what and how a brand should be.

Space10’s mission is simple – investigate the future of urban living through a series of labs. Each lab lasts three months and focuses on a selected theme. During the first 2 months, a dozen or so designers from all over the world are invited to huddle and turn ideas into prototypes. Then, this is where it gets interesting. In the last month of the lab, the public are invited to come in and check out the prototypes (and give feedback presumably). Then, the process begins again with a new theme, with all new designers.

Will these ideas be turned in reality? We don’t know yet but you can be sure we’ll be hearing more from Space10.

When Rebel Agency launched Space10, they also wanted a spot of fun with IKEA hacking. They challenged the progressive artist and designer Maaike Fransen to create interior design for Space10 using only repurposed IKEA products. The result was two fantastically odd and whimsy IKEA hacks. Her first is a bubbly white hangout space that you can really dive into, and the other was a runaway workstation. 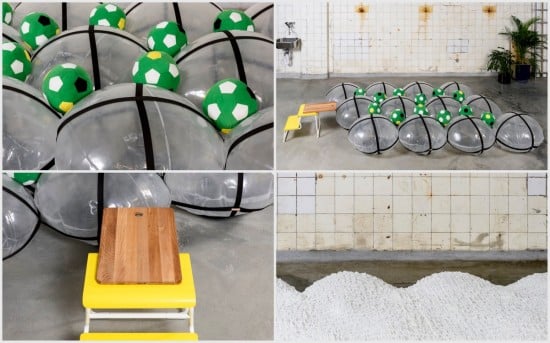 The Cloud is made of 12 transparent inflatable IKEA balls, sold as children’s toys.

“I bought as many as I could find in IKEA Amsterdam, blew them all up and filled a whole room. It looked cool, but was not really appealing to lay down on, because of the rubber feeling,” she explained.

But when she stretched a white IKEA blanket over the balls, she imagined a soft, bubbly Himalayan landscape. “I knew that I was nearly there,” she says.

Her final challenge was figuring out how to attach the balls. After several attempts, she made a net out of black bands (available from IKEA’s Transport/Tools department). To that she added two little yellow stairs made into springboards.

“You just feel it’s a pool you can sink into!” she explains. 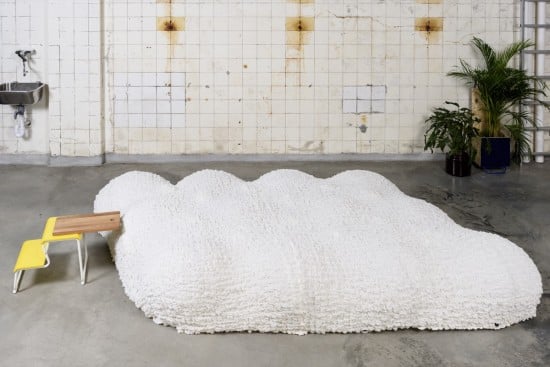 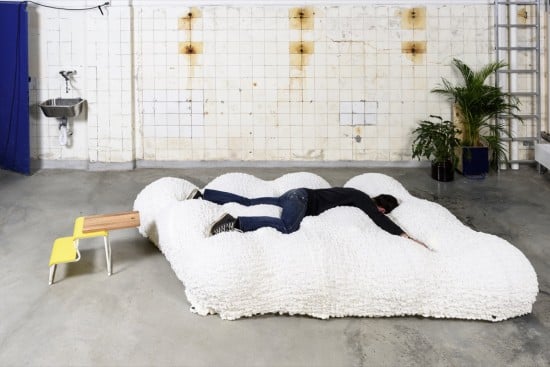 The workstation for lazy people 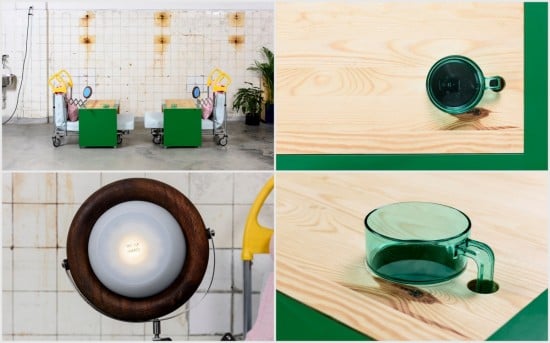 Maaike Fransen’s other hack was a mobile work-station/chill-out cart. Once again, all the different parts were constructed with elements Maaike found at IKEA.

“I actually had to steal the carts from IKEA. They are all over the place, but are not for sale at the moment. But I saw them and I had to hack them, it was an impulsive act!” she laughs.

The carts are designed to combine solo work with relaxation and the ability to move around the room. Each cart has a light attached, itself a hack made by combining an IKEA mirror, wooden table-ring, plastic storage bowl and a little touch-light. You just have to hit it hard.

The dark pink and red pillow-rolls in the carts are made by sewing together eight IKEA towels and filling the last one with an IKEA pillow.

The green and gray tables are made of two IKEA Lack tables joined together with an IKEA shelf. 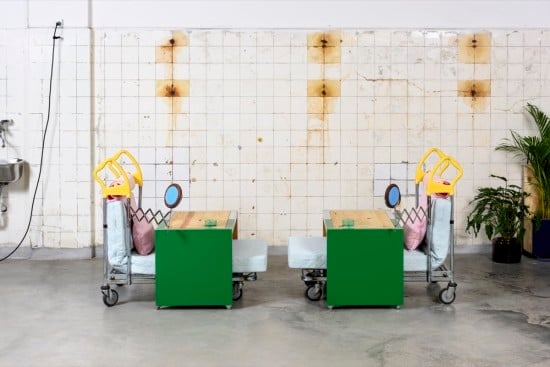 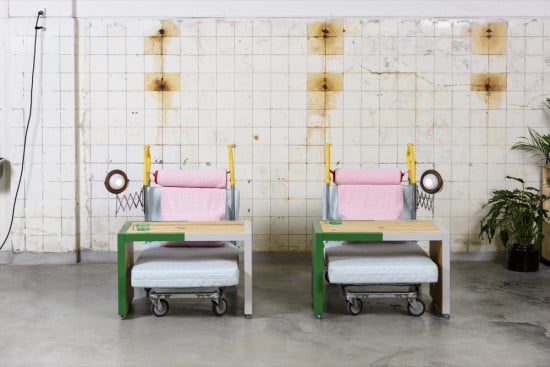 I don’t foresee getting much work done on these carts. But I’d love to challenge you to a cart race around Space10.