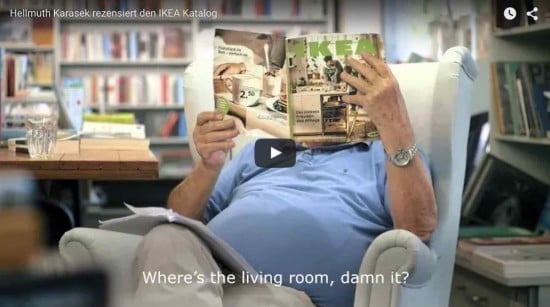 One of Germany’s most influential literary critics, Hellmuth Karasek says, “it is basically a scandal that the world’s most widely distributed book, with a print run of an astounding 220 million copies, has never been properly reviewed.”

He then goes on to give a scathing review of the IKEA 2016 catalog as if it is a literary work. Karasek takes his duty very seriously and his droll delivery made me chuckle.

Not surprisingly, the catalog fails as a novel. “The book by IKEA could be criticized for featuring more pictures than characters, It has a lot to say, but much could be considered junk,” he opines. “It is a furnished novel. The characters are forced to crowd themselves between the furniture, they seldom get their say, they barely speak coherently and yet this work has become such a success.”

Should we “read” this book? I am not going to spoil it for you. Go watch the amusing video for his conclusion.