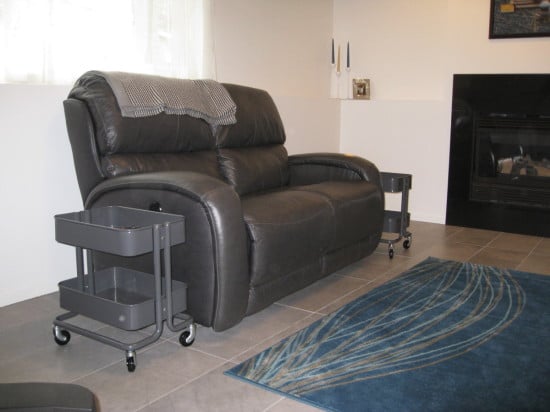 My wife and I were looking for some modern end tables for either end of our loveseat, but couldn’t find anything we liked. Then my wife spotted the Raskog kitchen cart at IKEA.

Raskog comes with three shelves/baskets, which are supported by four upright tubes, two at either end. Luckily, the tubes come in an upper and lower section. To make them the right height for the loveseat, I left out one basket and the top section of the upright tubes. The top tube sections have a metal plug at the top to give them a finished look. I just inserted a wooden dowel into the tubes and tapped out the plugs, then tapped them into the tops of the lower sections, and assembled the rest more or less according to the instructions. The result is two inexpensive, modern end tables on casters, which allow them to be moved easily for vacuuming.