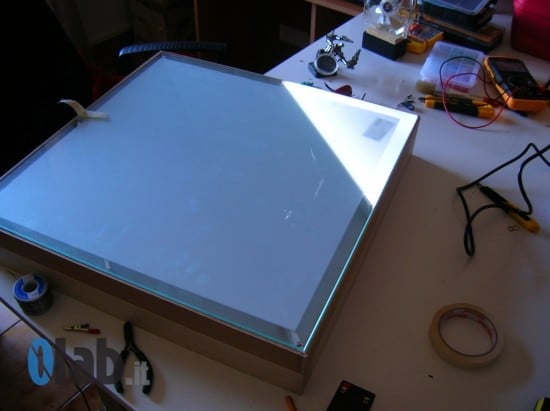 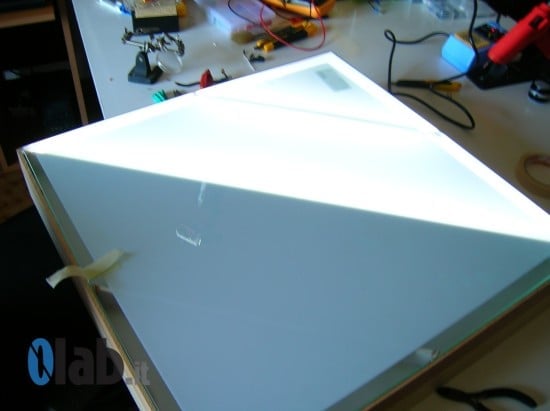 With € 7.99 you take home a beautiful coffee table simple and functional, just like I like them … And if we add the led becomes unique!

I was at the doctor and looking at the overhead to read the x-rays. I had the lighting (it must be said): If you plan to enlighten the rest of the IKEA Lack table?

No sooner said than done. A seemingly simple project became something quite complex because of the electronics used. The first version of the project involved using only the backlight LEDs for low power consumption and coverage of these with an opaque glass. During construction, however, I noticed that the glass is not opaque enough to cover the double bottom of the table. So I chose to use a layer of white Poliver. Also willing to make the project more geek I opted for the use of a control board Digispark for the management of blinking and dimming of the LEDs.

As already mentioned, the initial design called for the use of LEDs from 5 mm to low absorption. Tested the small light that would incorporate these to the table and the sad effect “low battery” has opted for the use of high-efficiency LED strips. The card alone, however, can not handle the absorptions of the LED strips, and therefore it was necessary to the creation of a circuit adhoc that would manage the LEDs through the use of resistors and power mosfet. Overcome this obstacle I came across a software problem. The library DigisparkRGB, in fact, limits the use of the PWM control to three output pins. The areas to be monitored was 4 and I had to get around it by writing a brand new code that controlled properly switching on and off but mostly in PWM dimming of the LEDs.

The result is what you see in the picture. And it is a true success! I have already ordered three …

See more of the LED LACK side table.