Description: Our 3 cats were in need of some extra space. They seemed to be outgrowing their small-ish enclosure and it was increasingly difficult to have to take them out and let them loose indoors since I was developing a bit of an allergy to their fur.

We had a narrow space behind the house which was roofed and enclosed by grills (e.g. bars on windows – quite common here in Malaysia), but was effectively still “open to the elements” and therefore quite airy. This was initially planned as an extra “wet-kitchen” for us, as well as a place for the washing machine which we didn’t want running inside the house. However, we barely used it for anything other than washing so decided we could locate the cats there. They would be safe from access by the public/strangers but still effectively be outdoors.

My wife and I were considering various options; from having a new enclosure tailor built, to thinking about what could be modified to suit the purpose. In searching for inspiration online, we came across the chicken coop hack here on Ikeahackers (what luck!) and decided we could probably use something from IKEA as a starting point. 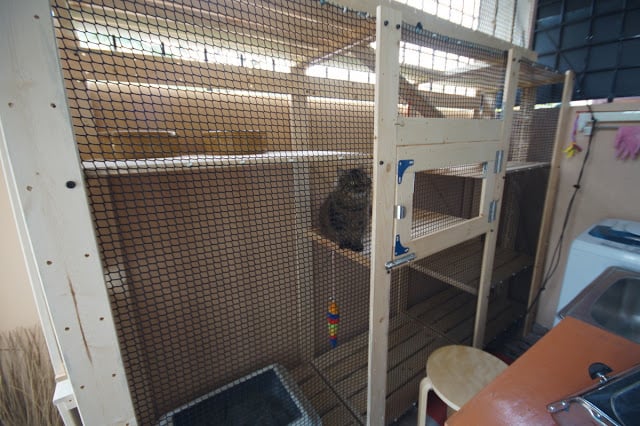 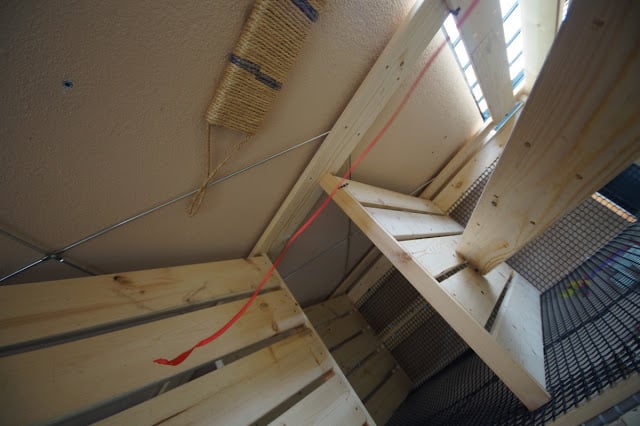 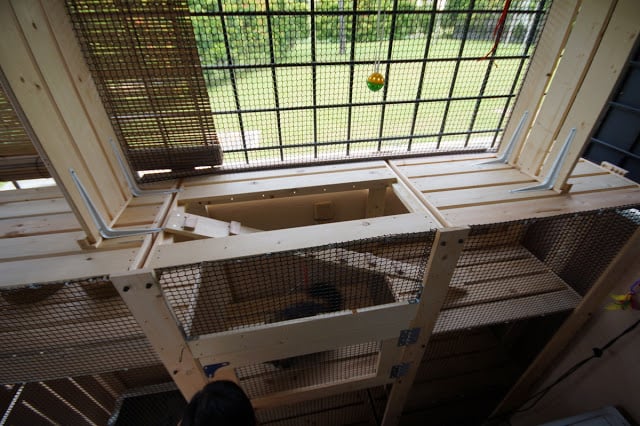 One trip to IKEA and we had it! The base enclosure is made of 3 large (55cm deep) Gorm shelves, tied together with bolts. We put heavy plastic netting around the entire thing, making sure to bolt the netting underneath the vertical beams of the shelf so as to hold them tightly in place. On the side, at about waist level, we fashioned a door using leftovers and offcuts of the basic materials we used in the rest of the build; this is nicely hinged and has a latch, and is used for retrieving/placing the cats from/to the enclosure, or for us to place food etc. The entire left side of the enclosure opens up for us to access litter and main water and food containers.

On the top we attached a smaller Gorm shelf (33cm depth) sitting horizontally to form a “penthouse” for the cats. This is accessed via a purpose built “staircase” through the centre unit of the base/bottom enclosure. The side of the penthouse opens up for us to access or to be left open when we want more air in/out. So far we found the cats to really like being in this top compartment. There enclosure rests against a wall, restricting visibility outside. The penthouse sits just above this wall, so I think the cats like being there to enjoy the nice view they get of trees and birds flying around.

The access door on the side has proven to be really useful, and was well worth the extra effort to build it. The solid hinges are really appreciated each time we open the door – feels very reassuring and “proper” (these are the chunky kind with nylon washers for smoothness, think they are used for normal doors). We attached a knob from some other IKEA build that didnt need it, and also added a latch to close and secure in the evenings. Each evening my wife really loves propping the door open and sitting on a stool outside the enclosure; taking the cats out in turns to cuddle them.

This was a 2 day build by me and my wife. We used mostly tools around the house and mainly had to buy netting, lots of screws, cable ties, in addition to the 4 Gorm units used. Looking at it now, we’re really happy with it; it provides plenty of space for the three cats, and given the space constraint we had really is much better than anything we could have bought ready made. Is it better than having a tailor/purpose built enclosure? Time will tell I suppose!

Whats left now is to finish the wood. A bit confused as to what to do to seal/ finish/protect it, especially from termites. Appreciate any input and comments anyone has, on the build and especially on this front.