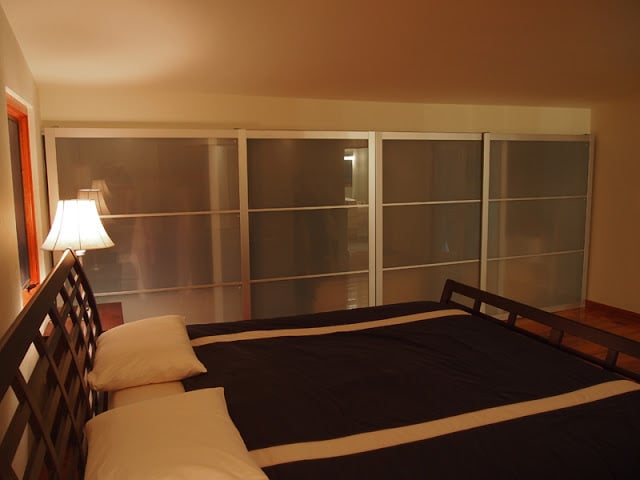 Description: When I purchased my house it was in dire need of renovation. We repainted, put down hardwood floors (not easy on top of concrete), installed new windows… the whole shebang. When it came time to pay some attention to the master bedroom, I was unhappy with the closet doors. There are three equally-sized closets, though the doors were uneven, held closed with finicky magnets, and prone to sticking whenever the weather changed. Plus they just looked bad. 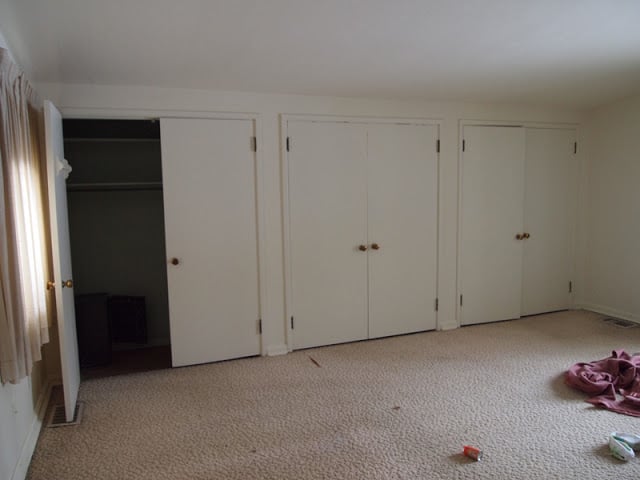 To IKEA! There I found the Pax Lyngdal sliding doors (light frosted glass, aluminum frame) in a near perfect size: 78 3/4″ x 118 1/8″. It seems to no longer be available in this size, but this should work with any size Pax door of the sliding variety. After some brainstorming we concluded that the four doors would work over the three closets, just with some overlapping. Ideally we would have dug up three doors that were a smidge wider, but a custom solution would have cost ten times more than the $250 per pair the four doors cost. So we rolled with that.

The first hurdle was attaching the top railing. The way that the Pax doors work puts the railing below and behind the top of the door, which meant that we had to fill in about six-inches of space at the top of the existing openings. That was solved with a few brackets and a cut-to-size 1×6 in each doorway.
[backing.jpg]

The next hurdle took almost as much head-scratching as figuring out how to arrange
the four doors: the bottom. With the rail behind the doors, the center of gravity pulls the doors in towards the wall without something at the bottom to hold them in. On the Pax wardrobes and many installations that’s the bottom rail. I wanted to be able to step into the closets, and also wanted to avoid damaging the newly-installed flooring. Also, the bottom rail for the Pax is rather tall.
After tossing around a few ideas (a double channel rail, or a single channel the front doors would rest against?) I was looking at the back of the doors and it dawned on me that we could use the screw holes meant for attaching the wheel brackets for the lower rail to instead hold a series of pegs/sliders.
A quick trip to the hardware store for a bunch of screws, washers, and plastic caps and we had a solution. The screw/washer/cap solution was mounted in the following locations:
On the baseboards of the original dividers between the three closets. These pegs keep the inner doors pushed out to a good vertical. 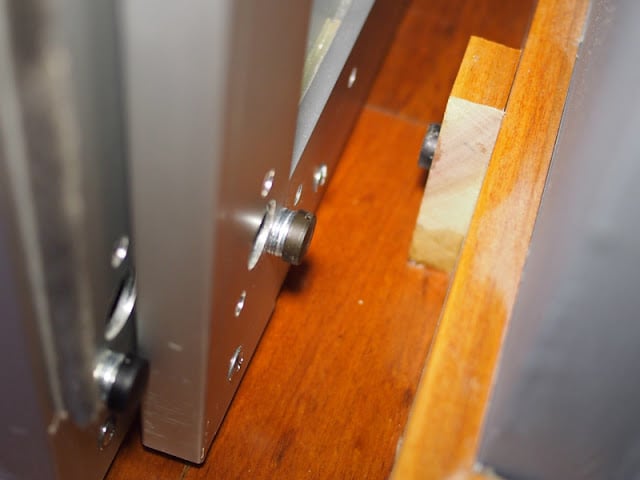 On the lower back corners of the inner doors – these are also the two center doors. These catch on the baseboard pegs, keeping the doors from going too far and swinging back into the opening of a closet.

The final step, after getting that all figured out, was some additional painting. Everything between the two side wall, below the top rail, to the back of the remaining door frames was painted a medium gray. Unless the light is just right, the medium gray makes the painted elements disappear behind the light gray frosted glass of the Pax doors. The rest of the closets were left as is – not enough light gets back there with the doors closed to make it stand out. 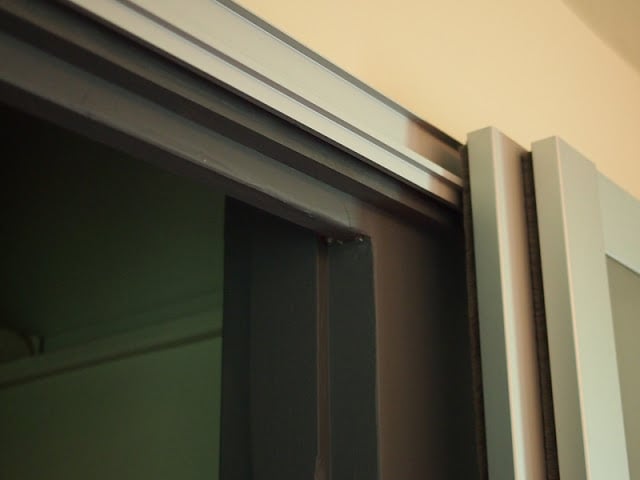 See more of before and after photos.