Japanese/Swedish Kotatsu (made in Australia for Canadian conditions) 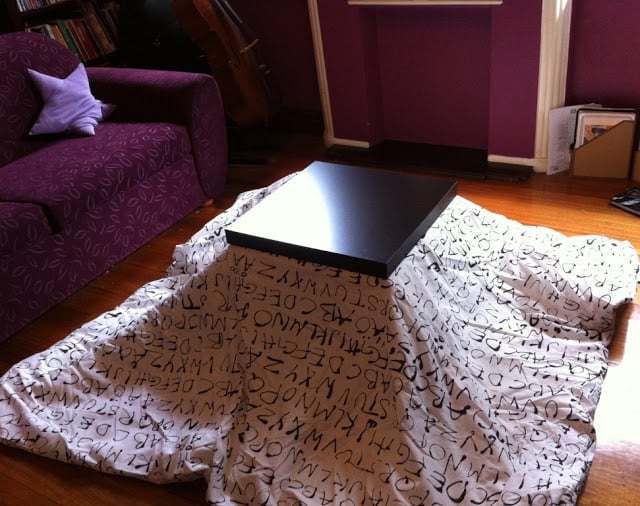 Description: A Kotatsu is “a low, wooden table frame covered by a futon, or heavy blanket, upon which a table top sits. Underneath is a heat source, often built into the table itself. Kotatsu are used almost exclusively in Japan, although similar devices are used elsewhere.” (Wikipedia)

We discovered the luxury of a Kotatsu during a stay at an unheated Buddhist monastery in the mountains of Japan in December 2010.

I looked for a Kotatsu to buy locally when I returned to Australia, but the ones I found had two drawbacks: they were extremely expensive and looked crappy.

In September 2011, my son moved to Ottawa, Canada (aka Ottograd) to attend Carleton University (aka Cartoon U). Simon loves Ottawa, politics and everything Japanese. I wanted to make him a gift that would remind him of good times in Japan and help him maintain his love of Ottawa through the freezing local winters. 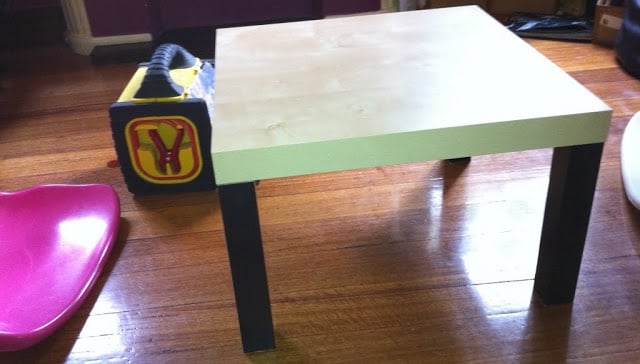 I opted for 12v power for three reasons:
1) International compatibility (I’m hoping he’ll want to relocate to Australia when he finishes his degree)
2) Can be used when camping (the idea of sitting under this in a tent or under the stars strikes me as v. awesome)
3) Reduced fire and shock hazard (to be honest, sitting with 120v and 240v electricity that close to my sensitive bits scares the hell out of me). 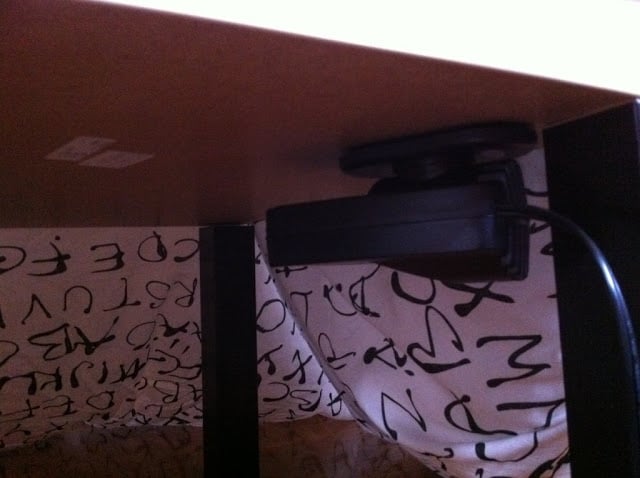 I picked up two Snille chairs without legs for $5 each in the Clearance department at IKEA Melbourne, to use as Japanese-style chairs with the kotatsu. These are ‘nice to have’ but not essential– it’s perfectly comfortable to just sit on the floor.

Construction steps:
1) Shorten the legs of one of the Lack tables to 20cm (measure twice, cut once). CAUTION: Make sure you’re cutting the bottom of the legs and not the top.
2) Attach the legs to one table top
3) Attach the 12v heater to the underside of the table using the self-adhesive Velcro tabs supplied, keeping the heater off to one side to allow maximum knee room underneath
4) Lay the quilt over top
5) Place the second tabletop atop the quilt. I found that the friction/weight of the upper tabletop is sufficient to keep it from sliding around.

Bill of materials (prices in Au$):

Updated 11 Jan
I meant to mention that by buying Lack tables in two different finishes, you can get two completely different looks for your Kotatsu by swapping the tabletops.

I went with the two ‘natural’ finishes (birch effect and black-brown).

Also, I think I might have referred to the Lack coffee table. I actually useed the Lack side table, the one that’s 55cm square (and 45 cm tall before surgery)