Tools: A hot glue gun, a small saw, a soldering iron, some flux, soldering tin, a knife, a lighter, a flat screw driver, an M3 wrench, or small pliers will do as well, a file, some rubber foam and/or duct tape

Description: Welcome to the Grono RGB LED moodlight hack. First of all, you need a Grono, of course. 🙂

Then, you will need to modify the original lamp socket to accommodate the PCB we will prepare later on. Take the flat screw driver and pry the noses that hold the socket together apart – on both sides, which might be a bit tricky. Pinch off the cable with your pliers and remove it completely, we won’t need it. 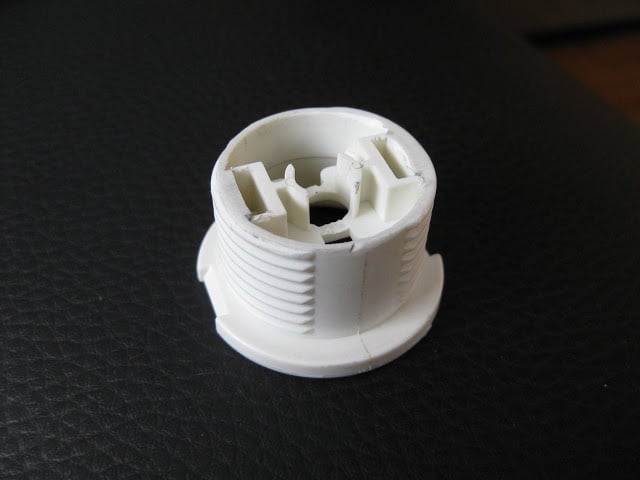 Grab your saw and shorten the socket as much as possible so it will still be fixable with the ring that has to be screwed on the socket on the inside of the Grono lamp. Afterwards, file it down (or use sand paper if you like) to get rid of residue and sharp edges.

Finally, twist off the rest of the cale relief at the bottom. But be careful, the inner part shouldn’t break off, as the hole is needed for locking the PCB with a screw later on.

The first picture shows you what your socket should look like. Don’t cut it down too much or you won’t be able to mount it into the lamp anymore.

Now, it’s time to assemble the PCB. 28 6-pin RGB Superflux LEDs need to be soldered on it, as well as 12 suitable resistors and the four cables coming from the RGB controller. This might take you about 30 to 60 minutes, depending on your soldering skills. Be careful to solder each LED in the right way as polarity is vital – otherwise parts of the PCB won’t light up at all as there are always 7 LEDs in a row. 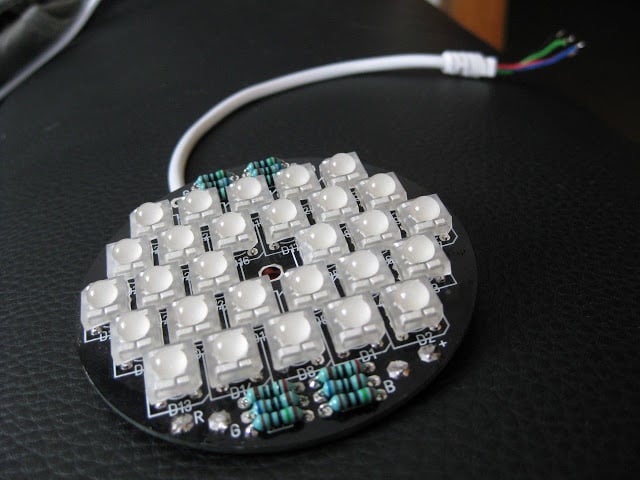 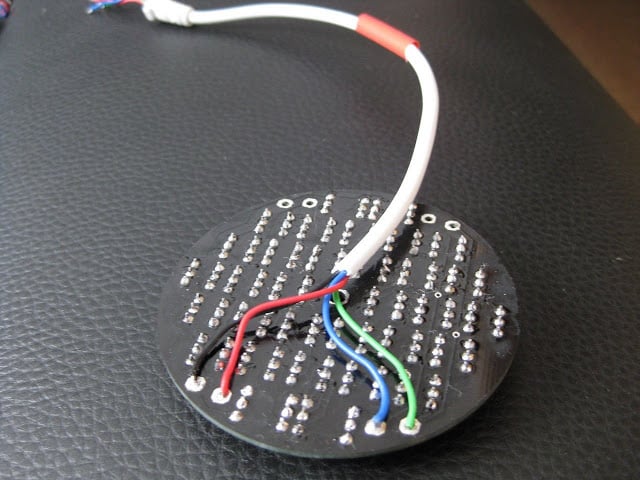 As the RGB controller is made in China and the manufacturers rearrange their pinouts as they see fit, you may have to try which channel is which color (cable colors may differ from the channel’s color). The black wire is usually the common pole (in this case the anode) and the other wires carry the signals for each color. A multimeter comes in handy to determine which wire needs to go where.

So, pinch off the plug on the controller (be careful not to pinch off the IR receiver – that’s the second cable coming out of the white box, with a small square IR receiver at the end). Remove the white isolation (about 2 inches) and carefully do the same with the colored thin wires on the inside of it – on both ends of the cable. Solder the four wires onto the PCB according to the markings.

Before mounting the PCB into the lamp, you should isolate the underside of the PCB with some rubber foam and/or duct tape in order to prevent shortcuts between the soldering points of the LEDs. 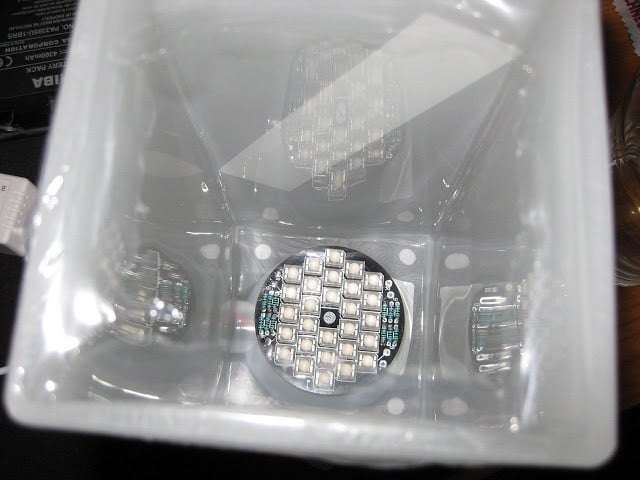 After that, you can place the PCB in the lamp and put the M3 screw through the hole in the middle of the PCB. Hold it down with one finger and turn the whole lamp upside down, taking care that the PCB won’t fall out – now put the nut on the bolt and tighten it carefully (not too much!). Shove the big shrink-on tube over the small wires. Do the same to each of the four small wires with the small shrink-on tubes. Solder the wires from the PCB back to the corresponding cables coming out of the RGB controller. 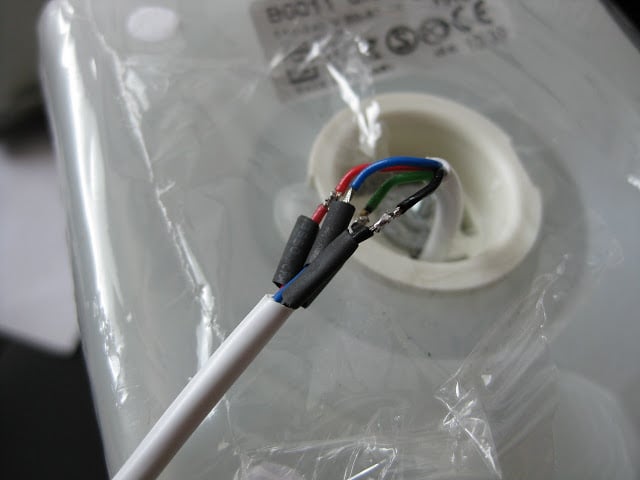 If you did everything right, you got yourself a lovely colorful ambient light that also packs a punch – we’re talking five watts of LED power here 😉

For pictures of it in use click the link below. Keep in mind that those pictures were made with minimal ISO and shutter times so the colors came off right – otherwise there would only be bright blurry circles. It is _much_ brighter in reality!

Cheers and thank you for any comments!