Philip and Cat’s home: An Ikea shoe room and more

Jules YapNovember 17, 2009
Secondary Storage45 Comments 1
The whole is definitely greater than the sum of its parts, as we’ll see in Phil’s series of hacks for his new home with his fiancée, Cat. Great use of simple Ikea hacks.

1. The Shoe Room
“I thought I might share the shoe room I built for my fiancée seeing as it drew a lot of interest when I first put photos of it up on Facebook. 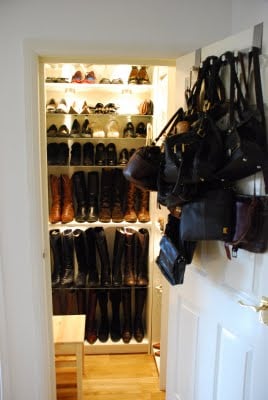 We moved to our new house about a year ago and have since been giving it a complete makeover (involving a lot of trips to Ikea and a lot of swedish meatballs in my stomach). A few months after moving in I decided to surprise my girlfriend with a shoe room. I picked up a couple of Billy book shelves with height extensions and a new light (A triple halogen that I can’t seem to find online right now) to put into the small walk-in wardrobe room that was next to our bedroom. It was a waste of space before hand, consisting of nothing but two boring hanging rails and a simple hanging light bulb.

While she was over the moon at having a room dedicated to her many shoes and boots, six months or so later and after we got engaged, I decided that she deserved better. So off to Ikea I went again. A few meatballs, a splash of paint and some wiring later and I’d upgraded her shoe room with lots of downlighters (Grundtal spotlights), glass shelves (Billy), a belt rail (I can’t find the name) and a bag rail on the back of the door (Grundtal hanger).

While there’s not really that much hacking going on here other than the tenuous hack link of using book shelves as shoe shelves, I figured it may be of interest to others and may inspire some other men to follow suit and in the process get an exorbitant number of brownie points with one’s other half.”

2. Bedroom Mirror
“My fiancée wanted to have a greenish theme to our bedroom and got a bed throw and some cushion covers to start things off. She wanted a big mirror to go over the bed’s headboard but wanted it to have a hint of green and didn’t really want it looking too modern. The rest of our house is very modern so she wanted something a bit ‘older’ looking for the bedroom. We got a Hemnes mirror from our favourite meatball suppliers and then modified it a little. 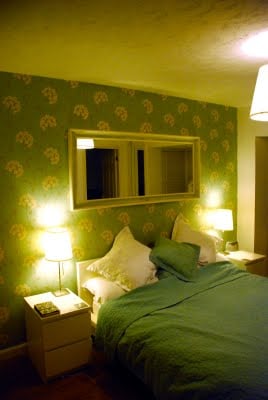 She painted the inner edge with some light green paint and then used some ‘antiquing’ paint on stuff that makes the paint under it crackle a little to give it the finish she wanted. It was very simple but we think it looks really nice now.”

3. Hall Mirror
“For some reason the builders of our house thought the perfect place for a big ugly doorbell and the house’s thermostat would be right in the middle of a big long corridor wall. In order to hide it, we bought two Molger mirrors (although we only needed one piece from the second pack). I simply mounted the mirror backwards in the frame and used the base piece from the second pack as a replacement top piece (since Ikea have it designed that you slide the mirror in from the top afterward so for our needs the top lip would have been missing). 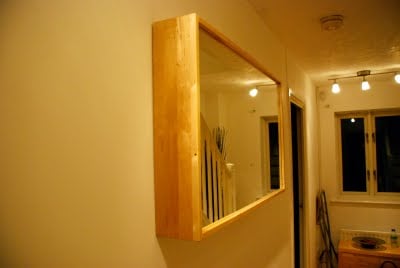 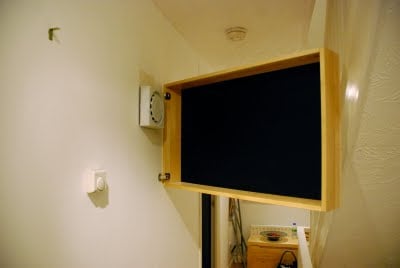 I bought some hefty cupboard hinges from a local hardware store and a little metal L-bracket and mounted mounted the mirror to the wall. The hinges are more than strong enough to hold the mirror but I use the L bracket to hook the mirror on when closed so as to make sure that it is level. So now it just looks like a chunky mirror yet we can open it up to change the thermostat when we need to.”

4. Under Stairs Storage
“Nothing groundbreaking here but since it involved using a dremel to cut metal it may be ‘hackworthy’. Our house has a cupboard under the stairs on the ground floor. It didn’t have any shelves in and had no lighting. Basically, it was an utter mess. Ikea didn’t have anything that fit our needs. The Broder system was the closest match since it had shelves big enough but even in its shortest form, it was too tall. We bought a couple of shelves, three posts and a height extension rod and I cut the post lengths down to size so that we could fit in one long Broder deep shelf and one short one. I also added some faithful Grundtal spot lights which I wired in to the main lighting for the hallway. The end result is a far better use of space and is much cleaner looking than before.” 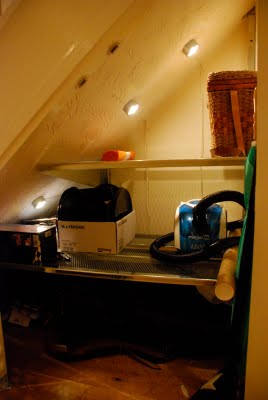 5. Kitchen Storage
“This was by far the most work of the lot but definitely worth it in my opinion. The space above our fridge freezer had become a rather unsightly dumping ground for random bottles and general stuff. I wanted something far tidier looking and far more practical. 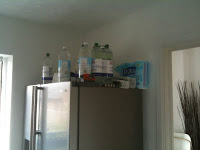 The answer came in the Pax shelf we had left over, lying in the garage left over from and from the many many plain white Billy shelves we’ve now got after I upgraded the better half’s shoe room with glass shelves. After a lot of measuring I worked out that I could fit four Hutten wine racks on one side of the Pax shelf and I could use cut down Billy shelves on the other side to create some shelving. After putting it all together with some metal brackets from a local hardware store, I painted the wine racks, added a Grundtal countertop light (the same as throughout the rest of the kitchen) and bolted it to the walls with three very large heavy duty brackets.

One edge of the Pax shelf had MDF showing as did one of the inner edges of the Billy shelves. I used some white edging strips left over from when we redid the rest of the kitchen to cover these up and they fit perfectly. I’m really happy with the result and love the way the light works through all the different colours of bottles. Our cat, Molly, obviously helped me build the thing. She was obsessed with the sawdust for some bizarre reason. 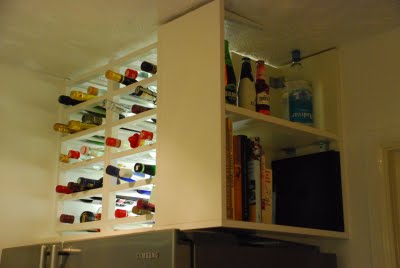 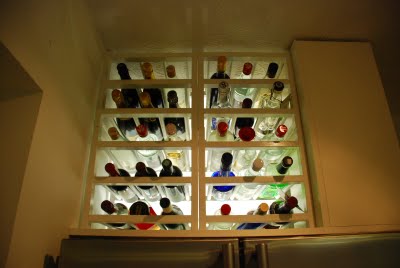 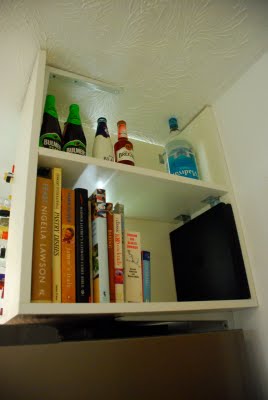 I hope some of these may be able to inspire others. When you start to think about how you can hack things, walking around Ikea becomes even more fun. You start to see so many more uses for things than originally intended!”