Joy bought the Malm storage unit thinking that she could use it for a night stand. But after moving, she realized that she had no use for it but did not want to part with it. So she turns it into a catch-all entryway storage unit instead.

Here’s what she did:
1. I took the top off and removed the two tracks that it ran on.
2. I attached legs from an old Lack side table.
3. Attached the old tracks to the long side of the unit so that a door could be attached to slide sideways. I would recommend putting the tracks at the edge of the side instead of the middle because my sliding door can only open to a certain point forcing me to reach in blindly to the right corner of the unit. Not a biggie though.
4. The front door is made out of plexiglass sprayed with frosted glass spray paint.
5. I bought one 1/8 x 2 inch ply wood piece and made a cut the wood to make a border around the plexiglass attached with wood glue and screws.
6. Bought a nice handle from Home Depot and attached it to the wood on the front for easier access to slide the door. 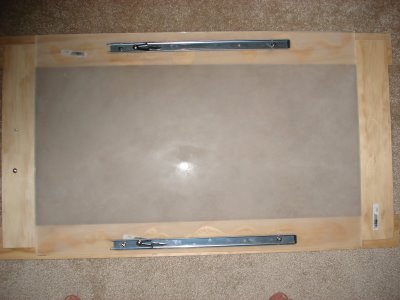 “It tucks all of my household tools away and became a good landing spot for my mail. It’s not the sturdiest thing in the world because the base of the legs aren’t very wide but before becoming an entry way storage, it was sturdy enough to be a bookcase that held my 23″ flat screen on top.”