long post ahead. you’ll probably want to grab a chair and enjoy these hacks.

fine tune your klippan
jenny from stockholm found a way to add style to her klippan without having to change the whole works. she gave it a skirt. am loving the kjol disco!

she says, “i made some skirts for the classical ikea sofa klippan. with it’s square design it’s perfect for tuning, like a Volvo 244! tuning your sofa encourages you to keep your old sofa for a few more years.” see more on her blog. 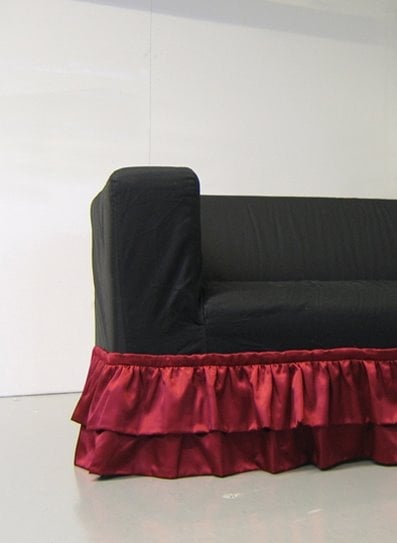 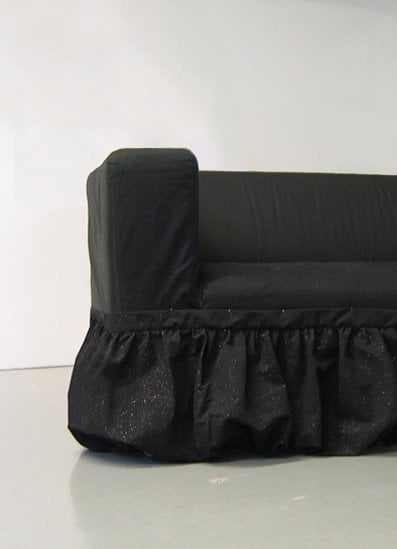 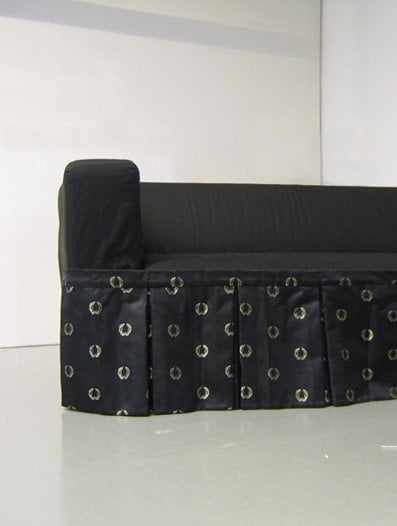 joakim returns
faintly macabre from portland, oregon, saves her joakim swivel chair from the dump. “here are some images of a joakim ikea chair that i reupholstered. it was 3 years old and headed for the dump, but with the addition of a little batting (to fill in where the foam had worn away) and some noguchi-print heavy cotton fabric, and a klappar bäver looking on – it looks like a million!” 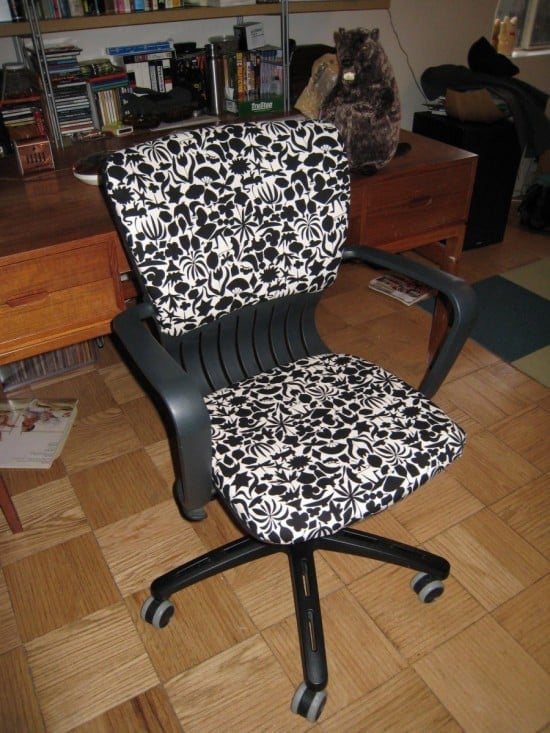 jennifer, an interior design student, was given a stefan chair and asked to use it in some way that would express her approach to design. she says, “well, it was the end of a long and very demanding semester and the last thing i felt like doing was this #$#! chair project. so, this was my solution – a scream chair. 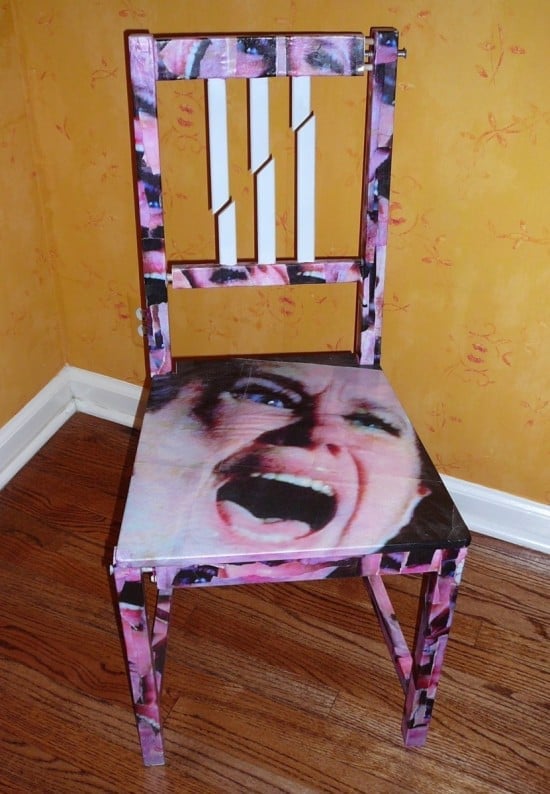 first, i switched the parts around so. then, i rented Airport ’75

, starring karen black as the stewardess who has to land the plane when the pilot dies. i paused the dvd on the shot of karen black screaming when she gets sucked out, and dies. what a great scream shot! i took a photo of the tv screen. and printed out numerous copies. then i decoupaged it all over the chair, tearing it into strips here and there. finally, it was sprayed with a clear coat. 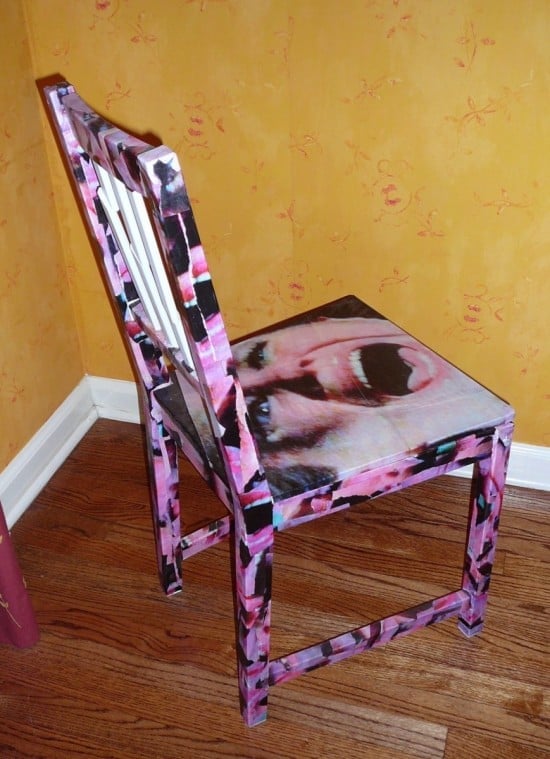 it took forever, but once i start something it must be done to perfection. after all, i had a point to make, which was – don’t give exhausted students who’ve been awake for more than 72 hours another project like this! i think it was a success. and it was worth the effort because it now resides in our upstairs hall.”

harry punk
karen, another uni student personalised the harry chair (i think!) for an assignment. she adds, “the chair came as a plain white chair with a benchwood legs and i then hand painted the design and added a tie, a face mask, badges and scarves. i also added leopard skin print onto the legs and a sort of door handle on the top for the accessories to be put around, to make it look like a ‘punk’s chair’.” 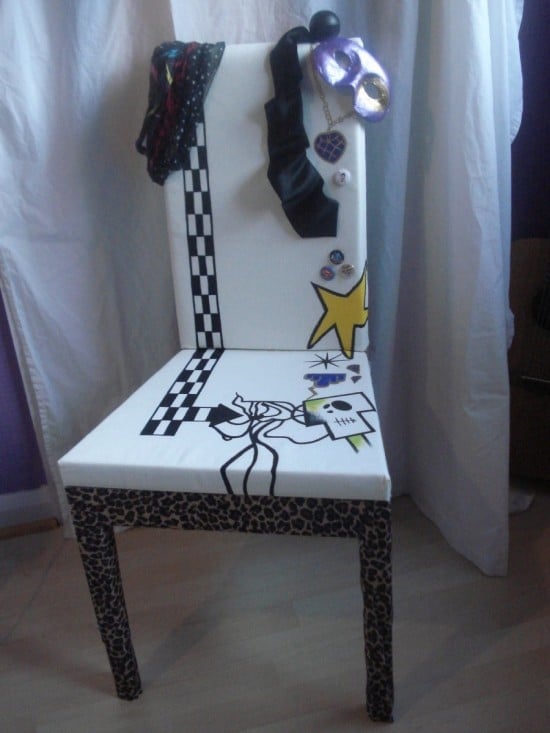 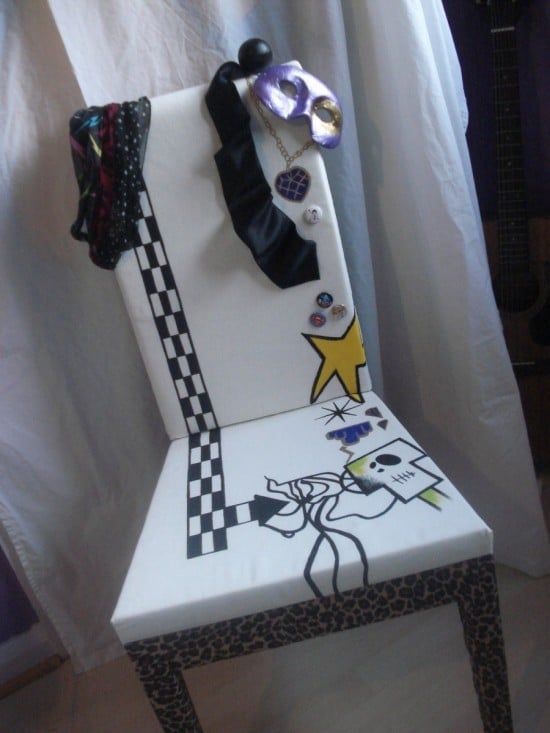 amy takes on the pello chair and sews up a cover for it. she says, “i made these pello chair cushions for a friend in TX. the cushions are not too hard as long as you already have the existing cushions to double-check your size as you go. the fabric used is Amy Butler’s Nigella ‘Imperial Fans’ 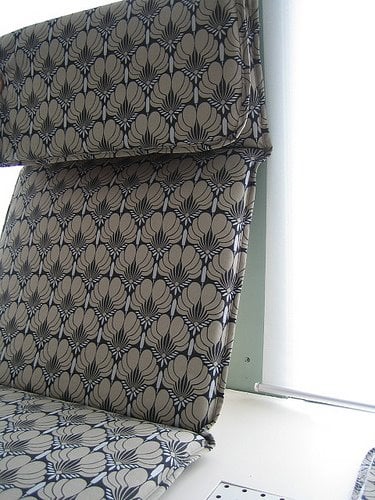 eliza does a kip on a svenning chair. she writes, “if you’d like to try it, just cut an oversized t-shirt in half and staple or baste the fabric to the underside of the seat cushion, and use a butter knife to push the second piece between the top cushion and its plastic backing. it takes four minutes.” see more on her blog. 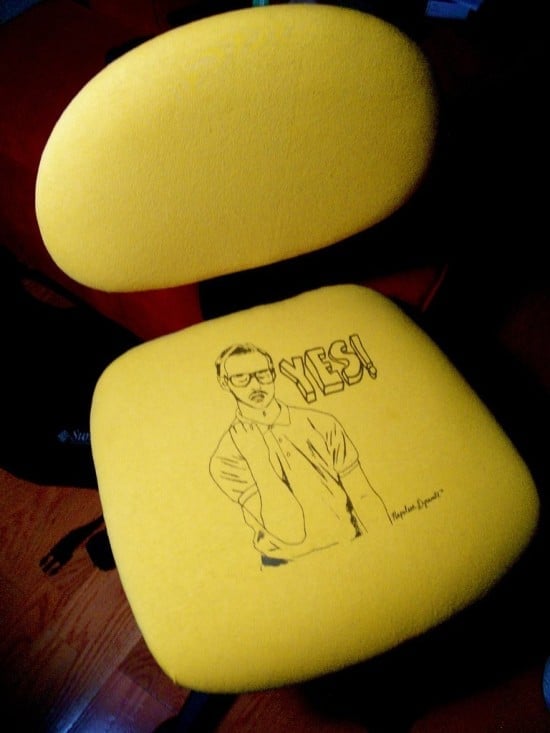 more svenning
june saw the post on holly’s re-covered svenning chair and did the same to hers. she says, “i don’t have a staple gun, so i left the old fabric on, and sewed the new fabric to the old with a curved upholstery needle. i’m really pleased with the result – my 4 year old chair looks better than new! see more on her blog. 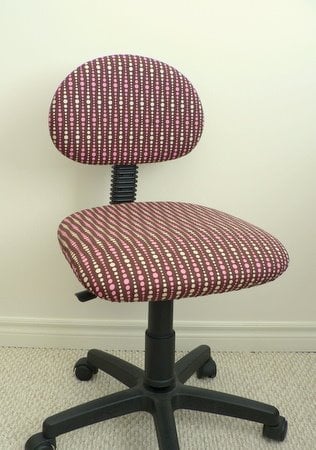 stefano gets pretty
angorian, also inspired by holly’s svenning reupholstery and this one on designsponge, decides to recover her boring grey stefano chair. see her mini-tutorial on flickr. 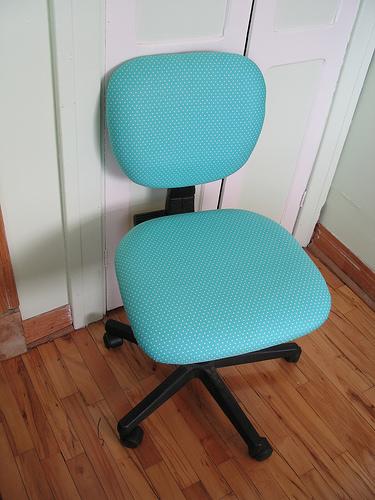 klappsta cover
mandi sews her own slipcover for the klappsta. she says, “i bought two klappsta chairs from as-is. the covers were really dirty, and since i didn’t care for any of the covers that ikea sells for this chair, and the ones at bemz.com were so pricey, i decided to sew my own!” 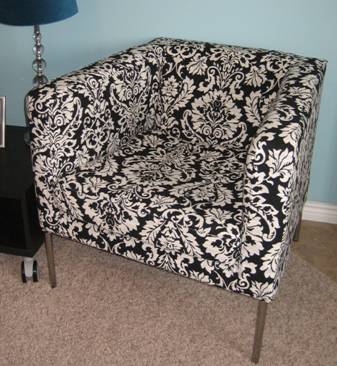 here’s how to do the slipcover: “i bought an old, dirty cover from as-is, and just cut it up for a pattern. for fabric, i used these great damask curtain panels

from target. ($35 each) i just cut it out, sewed it up, and they turned out fantastic! the real trick is having a pattern – buying an old cover that you can cut up is your best bet. if that’s not an option, you can take large sheets of newspaper and lay them up against the chair, attempting to trace the size and shape of each fabric piece. then you simply use these paper templates as your pattern, tracing them onto fabric and cutting them out. if you use this method, i’d recommend using a fabric with a little bit of stretch to it, so that the cover will be sure to fit. and using a patterned fabric, rather than a solid color, will help hide any mistakes you may have made!”

curtain slipcover
mary does an about turn with the curtains she bought and sews slipcovers for her loveseat instead. she writes, “i bought the ikea stockholm blad curtains but when i got them home i decided to make a slipcover for my new loveseat instead. i kept the seat pillow plain on purpose to keep it from looking over-patterned.” 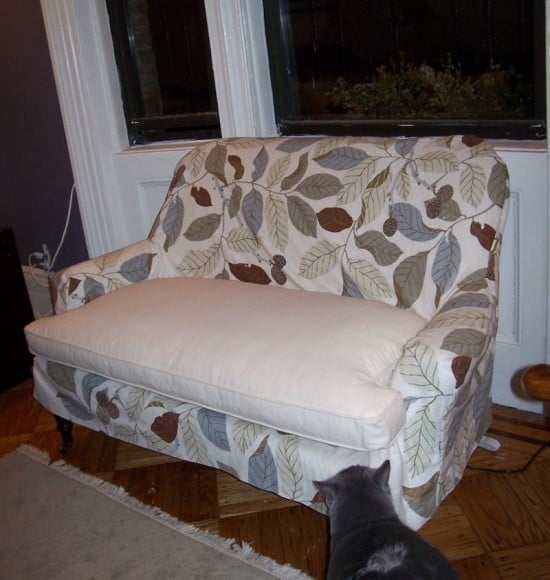 sallie says, “here’s an old family chair that i had professionally upholstered in a fantastic set of hedda curtain panels! she used the pieces taken off to create the new pattern. it took two sets of curtain panels to get the stripes to match up just right.” 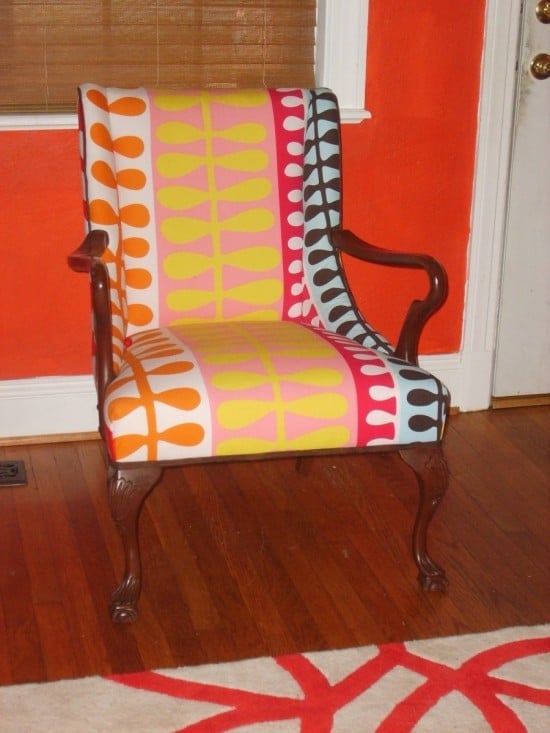 sea themed stool
guisy does a decoupage on an old ikea stool. she says, “i’ve decorated it with pictorial decoupage method, acrylic colours, a sea landscape paper napkin, some jamaican sand (original) and finished with water shine and matte varnish (for the legs).” 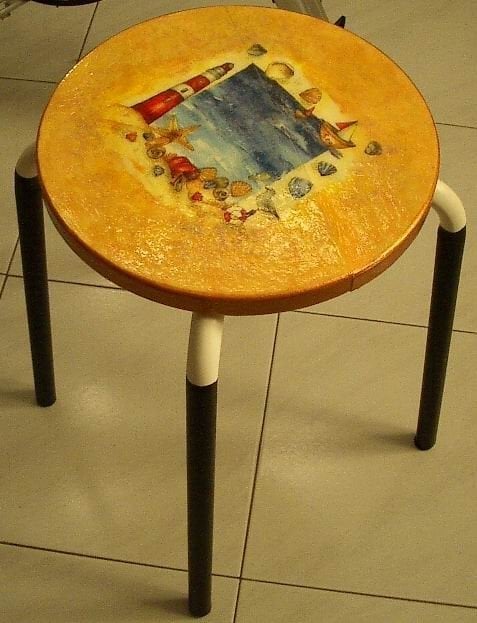 and lastly, the most important seat in the house
donné noom gives us a hack for the seat we often take for granted. “you take a racken toilet seat. take the lid and the seat apart (some screws for the lid and you split the seat by using a screwdriver). you drill two holes, one at the back of the lid and one at the back of the seat. you take a string of garden lights (skina, 40 bulbs waterproof 6 volts, any colour you want). glue 24 of them inside the base of the seat and lead the rest of the lights through the hole in the lid.

press the seat back together. glue the remaining lights in the lid. screw the cover of the lid back on. attach the lid back to the seat. the skina has an extra six meter of wire, so enough to get to a socket. in my case, i connected it to a motion switch. when anyone enters my bathroom the main and toilet seat lights are switched on. i’ve installed several now, for some of my friends (in different colours). i’m working on a version where the switch is triggered when you lift the lid.” 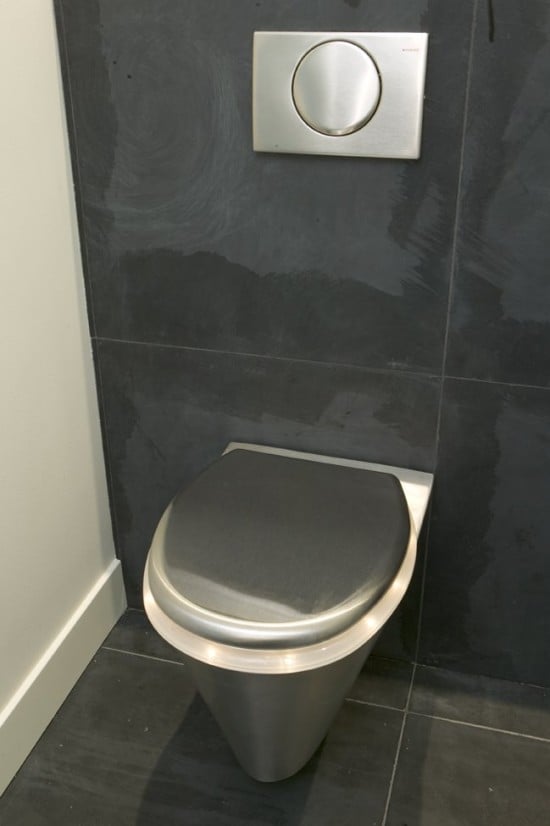 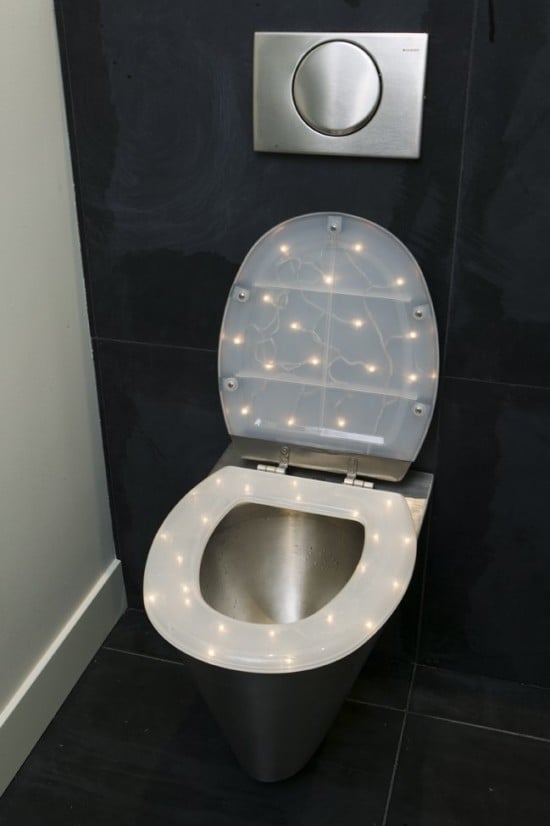 harry cleaned up
“i found a cool printed fabric that i thought would look great to reupholster the chair with. the first thing i did was spray paint the legs black to match the fabric. then, i ripped open the old cover and used that to make a template for the new cover. 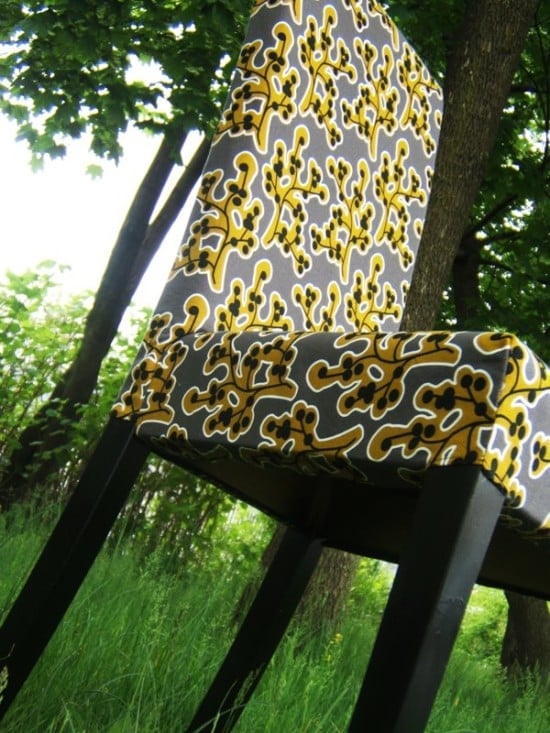 the only alteration i had to make was including a seam at the top since the fabric had only one direction and i didn’t want the pattern to be upside down either in the front or back. i think it turned out really hip for a free chair!”
frosta gets pimped
eve bought a frosta stool and did some decopatch (similar to decoupage). she says, “it was very easy, i used a red acrylic paint, then, i bought a special sheet for decopatch. scissors, glue and a lot of glossy varnish. that’s all!” 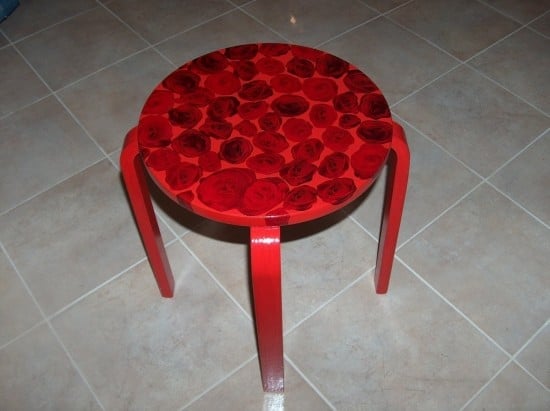