chopping board to bathroom shelf

here’s a quirky one from karen. she wanted a bathroom shelf but was on a super-tight budget, plus the fact that her bathroom was, as she terms it, painfully narrow.

“i wanted something that i didn’t have to saw or cut in half, was moisture-resistant, but was still durable enough to withstand the weight of a few bottles and jars. 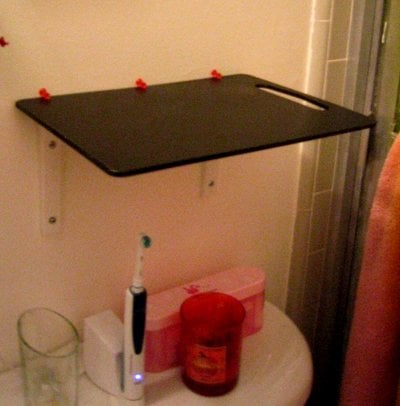 i purchased a black legitim chopping board and two stodis brackets. screwed my brackets into the wall, placed the chopping board on top, secured it with a couple of pushpins, and voila! brand new, easy-to-clean, sturdy shelf.”