this is one of the things i’m including more and more on ikeahacker. as much as i would like to feature only ikea hacks, some times i do come across homes, apartments and rooms that use ikea “as is” – gorgeous with no hacking, just clever decorating. it is such a pain to pass them by just because they don’t fit the category. so, after thinking about it for like 3 minutes, i’ve decided to deny myself no more. hopefully, by sharing these homes, we can inspire each another to create cozy, livable spaces. and that can only be a good thing.

so, if you’ve never hacked ikea but have a home or space that uses ikea stuff beautifully, drop me a line at ikeahacker [at] gmail [dot] com. we’ll love to sneak a peek.

to kick off this “ikea inspiration” section, as promised, monica’s makeovers.

kaleb’s under the sea bedroom
the first is her kid’s room. she got rid of the zanzibar decor and gave the kid an undersea world instead, repainting the room and reusing some of their old toys and supplementing with some new ikea stuff. 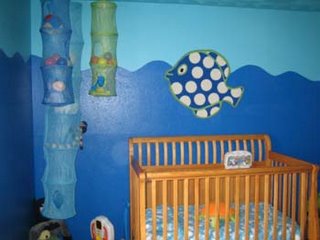 monica writes: “i’m a firm believer in “do the best with what you’ve got”, (plus, i’m a broke, stay-at-home mom) so we used furnishings we already had. we moved in a few things from another room and had The Great Toy Divide of 2006 (a divying up of toys between the rooms of our two kids.) 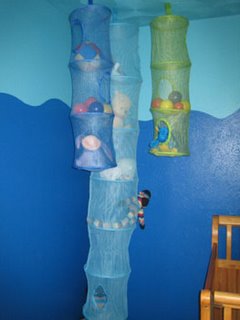 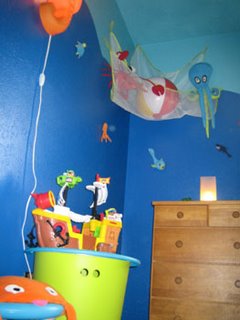 i had some items i had purchased new but never used and some items i purchased new, specifically for this room. all in all, our total cost was about $200! (if you’re wondering, that does include the cost of paint… we already had rollers, trays, and that sort of stuff.) kaleb’s reaction to his new space was priceless, and we were lucky to get it on video. the room has been redone for a week now, and he still gasps, points and smiles each time he enters it!”

go under the sea.

the green kitchen
now on to her kitchen, which is still a work in progress. but from what i can see, it’s shaping along swell. funny, i never thought i could love green, but she’s making me change my mind.

“my kitchen is in a state of what i call ‘painfully gradual’ remodel. i’ve been looking at dingy, off-white walls, funky old cabinets and 1970’s linoleum for six years now.

my stay-at-home mom salary isn’t cutting it (ha!) so replacing the expensive stuff is going to take a while. i finally decided to give the room a makeover and just change what i could. and what a change it made! 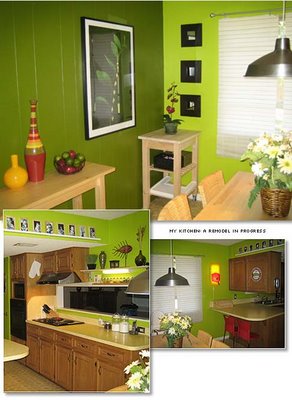 thanks to a weekend paint job and ikea goodness (some old, some new), i now have a fun place in which to grumble about funky old cabinets and 1970s linoleum.”

to the green kitchen 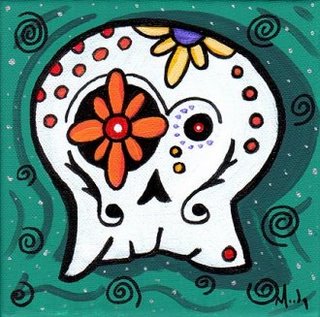 besides running fixchicks with michelle, this talented mommy is also an artist. she has some funky artwork – my favourite is this … er … skeleton thingy (pix), for lack of a better word. how she manages to squidoo here, here and here and take care of 2 kids and paint and diy is beyond me. so, kudos to you, mon.

view and buy her artwork here. help monica to finally get rid of those awful 1970s linoleum.